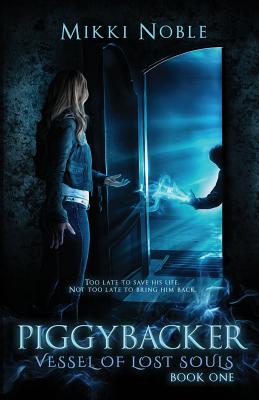 Everyone thinks Marley tried to take her own life, that is, except Marley. After her mother sends her to a youth center for troubled teens, she starts hearing the voice of a boy who claims he was murdered and begins questioning her own sanity. The voice is Gavin, a seventeen-year-old boy who promises Marley he can help her find the truth about what happened the day she supposedly tried to kill herself--if she completes a resurrection spell in the next four days.

Upon discovering Gavin's death in the newspaper, Marley realizes she's not hallucinating, and that she has a chance to save Gavin's soul and clear her name. The task seems simple: complete the spell, then she and Gavin are free, right? But a powerful, unseen force is determined to stop her, and soon Marley finds herself following clues from the universe to find ingredients for the ritual to save herself and her newfound friend, and most of all, to find the truth about what really happened that day.

Piggybacker is the first in Mikki Noble's spell-binding Vessel of Lost Souls trilogy, and promises a thrilling mystery with powerful enemies, broken relationships, captivating magic, and two souls both caught up in a plot beyond any they could ever imagine.