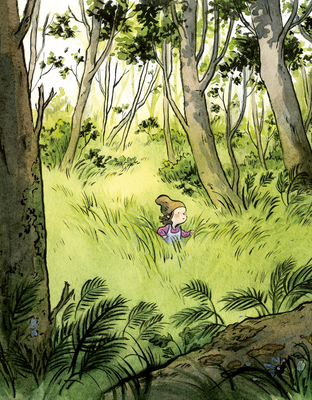 An inspiring story about decision-making and self-trust when you’re all alone, by critically acclaimed creators Nadine Robert and Qin Leng

Around Clover’s family’s goat farm, there are plenty of things to do, from picking blueberries to collecting clams. But making decisions, even choosing something to do, is a great source of hesitation for young Clover—that is, until one day, the child’s beloved goat, Peony, wanders too far from the farm. In order to bring Peony back home safely, Clover will have to learn to act quickly and decisively.

Nadine Robert began her career as a video-game designer and director of animated films. As the founder of the publishing house Comme des géants, she has always had a strong passion for illustrated children’s books that have a powerfully built narrative approach combined with strong images. Her most recent book, On the Other Side of the Forest, was named a Best Book of the Year by Kirkus and a New York Times/New York Public Library Best Illustrated Children’s Book. She lives in Montréal with her family. Qin Leng was born in Shanghai and now lives in Toronto, where she works as a designer and illustrator. Her numerous picture books have earned her an Asian/Pacific American Literature Award and nominations for several other prizes, including a USBBY Outstanding International Book, a Marilyn Baillie Picture Book, and the prestigious Governor General’s Literary Award.
"Lush, finely detailed ink and watercolor artwork forms the basis of this gently suspenseful story . . . A quirky and quiet pastoral tale that offers instruction to young children on independence and decision-making."—Kirkus

“Robert captures Clover’s indecision and appeals to the forest’s natural presences (“Gentle Stream, I need your help”), using each event to illuminate moments of deliberation in which direction and self-assurance flower.”—Publishers Weekly

"Clover develops different strategies for making choices and builds self-confidence in the process. While the book has a decidedly European flair, Clover’s anxiety will speak to many young readers and serve SEL collections."—Booklist