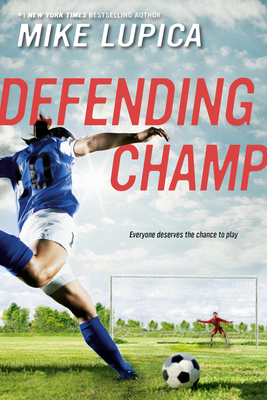 
On Our Shelves Now
In this follow up to Triple Threat, New York Times bestseller Mike Lupica takes us to the soccer field in another empowering story--now in paperback!

Fresh off her football victory as QB, twelve-year-old Alex Carlisle is on cloud nine. But with football season over, Alex is ready to get back on the field on the spring for soccer. But after tryouts, with Alex back on her old team, she and her teammates find out that athletic funding has been cut in Orrville, and girls soccer is one of the first teams to go. Now, Alex knows playing soccer is about more than just healthy competition—it’s about fighting for their right to play. Why should the girls team be first to get cut?

So the soccer girls hatch a plan. The girls team versus the boys team; if the girls can raise enough money, they will fund their own season. But Alex soon realizes that her plan to save the girls team has consequences. Will Alex be able to figure out a way so that everyone gets the chance to play? Or will the girls be the ones left out?
MIKE LUPICA has been called “the greatest sports writer for middle school readers.” He is the author of multiple bestselling books, including Heat, Travel Team, Million-Dollar Throw, The Underdogs, QB 1, Fantasy League, Fast Break, Last Man Out, No Slam Dunk, Strike Zone, and Triple Threat. When not writing novels, Mike Lupica writes a column for the New York Daily News and MLB.com, appears regularly on MSNBC, and does twice-weekly The Sports Reporters podcasts for Compass Media. He has proven that he can write for andspeak to sports fans of all ages and stripes.