The Best of Iggy (Paperback) 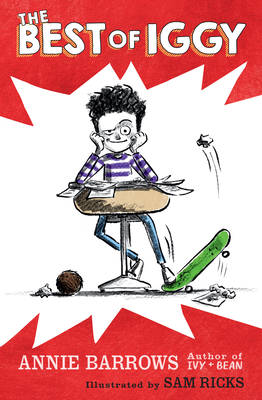 The Best of Iggy (Paperback)

This is book number 1 in the Iggy series.

“Another fun series by Annie Barrows! Kids who have trouble doing the right thing ALL the time will relate to Iggy. Fun illustrations accompany a narrative full of winking nods to the reader.”
— Robin Stern, Books Inc., San Francisco, CA

Meet 9-year-old Iggy Frangi. He's not a bad kid, he's really not. Okay, so he's done a few (a few is anything up to 100) bad things. And okay, he's not very sorry about most of them. People make a big deal about nothing. What's a little pancake here and there? Is that something to get mad about? Iggy doesn't think so. No one got hurt, so there's no problem. No one got hurt except for that one time, that one time when the Best Idea Ever turned into the Worst Idea of All Time.

Well, you'll have to read the book to find out.

Things Iggy will NOT do in this book:
Be the most polite kid ever.
Play the cello.
Think before acting.
Learn a lesson.
Regret his actions. (Most of them, anyway.)
Annie Barrows did none of the things in this book. As a kid, Annie Barrows was good and sweet and well-behaved. All the time, she was good. At least, no one ever caught her doing anything bad, which is the same as being good. She was so good that birds landed on her fingertips and sang. She was so good that people gave her candy for no reason. She was so good that her teachers cried when she went to the next grade.
She got worse when she grew up.

★ “The first of a series, this slender chapter book is inviting to pick up, hard to put down, and near-impossible to read without laughing out loud.” –Booklist, starred review

"Barrows's omniscient narrative voice is brilliant. . . Fellow fourth graders will love Iggy for his honesty and humor. But everyone will probably love him most for his motto: 'It Seemed Like a Good Idea at the Time.'" --The New York Times Book Review

"Fabulously funny and perceptive . . . Let’s just say that children with impish tendencies will finish this book feeling seen and understood. And the next time they get into trouble, you can expect to hear all about the extenuating circumstances.” –The Wall Street Journal

“[A] lively illustrated series opener about Iggy Frangi, a mischievous, good-hearted nine-year-old who frequently lands himself in trouble and only sometimes regrets it. . . With Iggy, Barrows (the Ivy and Bean series) has created a realistic kid—passionate, funny, and sometimes misguided—whom readers will surely root for as he gains awareness of the relationship between choices and consequences.” –Publishers Weekly

“The portrait of a boy as a young rascal. . . Funny, silly, and fairly empathetic—and perhaps even consoling to young, impulsive people who hope to be better (someday).” –Kirkus Reviews

“Young readers, especially those with a passion for mischief, will hope there are more chapters of Iggy’s exploits to come.” –The Bulletin of the Center for Children’s Books

“Fans of Barrows’s ‘Ivy + Bean’ series and books about kids who often find themselves landing in trouble will appreciate this laugh-out-loud tale.” –School Library Journal

“Humorous and action filled . . . [students] will be reminded that reading can be fun.” –School Library Connection

“This book is deeply ethical and totally hilarious. It's wise, generous, and delightfully unsanctimonious. Seriously: The Best of Iggy is one of the finest and funniest middle-grade books I’ve read in years.” –Mac Barnett, author of the bestselling Kid Spy series

“Warning: Do not let ‘extenuating circumstances’ keep you from getting to know the inimitable Iggy. You’ll be laughing so hard—pancake everywhere—that you won’t even realize the young troublemaker just stole your heart.” –Megan McDonald, author of the Judy Moody and STINK series

“Only Annie Barrows could have penned this outrageously clever, laugh-out-loud book, a magical feat that somehow combines hilarious hijinks with a thoughtful look at why we make mistakes — and how we make amends. I haven’t adored a well-intentioned troublemaker this much since Henry Huggins and Junie B. Guaranteed fun, this is the perfect family read.” –Katherine Applegate, Newbery Medal Winner for The One and Only Ivan”

“You’d have to have a heart of stone not to love Iggy. It’s not his fault he’s always in trouble. Well, it’s mostly his fault, but there are Very Compelling Extenuating Circumstances. Wise, sensible, smart children everywhere will hurl themselves (safely) at this hilarious new series from Annie Barrows.” –Sophie Blackall, Caldecott Medal Winner and illustrator of the Ivy + Bean series

“If you've ever done anything you regretted, or never regretted anything you've done, IGGY is for you.” –Jon Scieszka, inaugural National Ambassador for Young People's Literature