You Can't Be Serious (Hardcover) 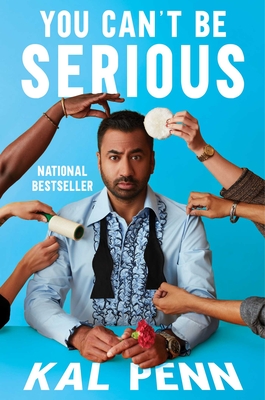 You Can't Be Serious (Hardcover)

The star of the Harold and Kumar franchise, House, and Designated Survivor recounts why he rejected the advice of his aunties and guidance counselors and, instead of becoming a doctor or “something practical,” embarked on a surprising journey that has included confronting racism in Hollywood, meeting his future husband, and working in the Obama administration, in this entertaining and refreshingly candid memoir.

You Can’t Be Serious is a series of funny, consequential, awkward, and ridiculous stories from Kal Penn’s idiosyncratic life. It’s about being the grandson of Gandhian freedom fighters, and the son of immigrant parents: people who came to this country with very little and went very far—and whose vision of the American dream probably never included their son sliding off an oiled-up naked woman in the raunchy Ryan Reynolds movie Van Wilder…or getting a phone call from Air Force One as Kal flew with the country’s first Black president.

With intelligence, humor, and charm on every page, Kal reflects on the most exasperating and rewarding moments from his journey so far. He pulls back the curtain on the nuances of opportunity and racism in the entertainment industry and recounts how he built allies, found encouragement, and dealt with early reminders that he might never fit in. He describes his initially unpromising first date with his now-fiancé Josh, involving an 18-pack of Coors Light and an afternoon of watching NASCAR. And of course, he reveals how, after a decade and a half of fighting for and enjoying successes in Hollywood, he made the terrifying but rewarding decision to take a sabbatical from a fulfilling acting career for an opportunity to serve his country as an Obama White House aide.

Above all, You Can’t Be Serious shows that everyone can have more than one life story. Kal demonstrates by example that no matter who you are and where you come from, you have many more choices than those presented to you. It’s a story about struggle, triumph, and learning how to keep your head up. And okay, yes, it’s also about how he accidentally (and very stupidly) accepted an invitation to take the entire White House Office of Public Engagement to a strip club—because, let’s be honest, that’s the kind of stuff you really want to hear about.
Kal Penn has played leading roles in some of the world’s most-watched television shows, including How I Met Your Mother, 24, Designated Survivor, House, and more. He currently stars on the Disney Junior animated series Mira, Royal Detective. He was also the cocreator and star of the NBC/Universal comedy Sunnyside, and host, cocreator, and executive producer of a six-episode series in October 2020 for Disney’s Freeform Channel called Kal Penn Approves This Message, aimed at entertaining and informing young voters. On the big screen, Kal has starred in movies that have collectively grossed more than a billion dollars, including the Harold and Kumar franchise, National Lampoon’s Van Wilder, Superman Returns, The Namesake, and many other critically acclaimed blockbuster titles. He has also served as an adjunct lecturer in sociology and film studies at the University of Pennsylvania, and in sociology and political science at the University of California, Los Angeles. Kal has worked at the very highest levels of politics, as an Associate Director of the White House Office of Public Engagement, where he was President Obama’s Liaison to Young Americans, Asian Americans and Pacific Islanders, and the Arts communities in America. He was born and raised in New Jersey.
“It’s crazy to me that a groundbreaking actor like Kal Penn is also so funny, humble, and down-to-earth. His life is fascinating and his book is wonderful.”
– MINDY KALING, #1 New York Times bestselling author of Why Not Me?, Is Everyone Hanging Out Without Me? (And Other Concerns), and Nothing Like I Imagined (Except for Sometimes)

"Kal Penn's journey is insightful, funny, and instructive for anyone who's ever grappled with how they fit into the American dream."
– RONAN FARROW, New York Times bestselling author of Catch and Kill and War on Peace

“Kal Penn is an American treasure. Which means that this book is essentially a treasure map. And the words inside the book are gems. And probably some of the words are also a skeleton with a bejeweled crown and an eye patch that has cobwebs all in between the skeleton fingers that are clutching all the gems because the treasure was so shiny and valuable that the skeleton happily perished while being buried with them. THAT’S how good this book is!”
– ANDY SAMBERG

“Kal is one of the most intriguing human beings I’ve ever met. His stories are magical and inspiring, and the way he tells them provides a ton of lessons to be learned. All his stories are must-reads.”
– ROB GRONKOWSKI, New York Times bestselling author of It’s Good to Be Gronk

“An incredibly joyful and insightful experience for the reader . . . Kal Penn’s journey is unique and special and demands respect. He delivers his story with a kind of compassion and humor we simply do not usually see. I recommend this read to anyone and everyone.”
– KIEFER SUTHERLAND

"This is such an enjoyable read—fearless, yet respectful on every page! The self-deprecation and other missteps had me rolling with laughter, and the candor with which Kal talks about some of his struggles made me emotional. An inspiring book!"
– TONY SHALHOUB

"Looking for a book that’ll make you laugh out loud? Look no further."
– DAILY HIVE

“A gift for anyone in need of a laugh or pep talk, You Can’t Be Serious is loaded with a perfect blend of ‘you can’t make this stuff up’ and ‘don’t stop believing’ fun.”
– ROXANNE BAKER, SRQ Daily