Where Is the Buddha? (Hardcover) 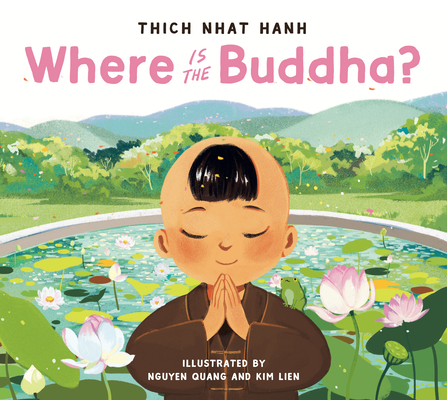 Where Is the Buddha? (Hardcover)


Usually Ships in 1-5 Days
A new story for children from Zen Master Thich Nhat Hanh: a young boy named Minh goes on a journey to find the Buddha, only to discover the Buddha is in each one of us

As Minh grows up, eventually he realizes that the Buddha statue isn't actually the Buddha. But if the statue isn't the Buddha, then what is? Where is the Buddha? With his characteristic insight, sincerity, and sense of humor, Thich Nhat Hanh guides young readers through a charming tale of discovery, beginning in India with the story of the historical Buddha, Siddhartha, and then on to Vietnam with Minh and his quest.

Includes a section at the end of the book on How to Be a Buddha, with basic breathing exercises and meditations for children.
Thich Nhat Hanh is one of the most revered and influential spiritual teachers in the world today. Born in Vietnam in 1926, he became a Zen Buddhist monk at the age of sixteen. Over seven decades of teaching, he has published more than 100 books, which have sold more than four million copies in the United States alone. Exiled from Vietnam in 1966 for promoting peace, his teachings on Buddhism as a path to social and political transformation are responsible for bringing the mindfulness movement to Western culture. He established the international Plum Village Community of Engaged Buddhism in France, now the largest Buddhist monastery in Europe, and the heart of a growing community of practice centers around the world. He lives in Hue in Central Vietnam.

Kim Lien and Nguyen Quang are Vietnamese illustrators who have collaborated on books published in a number of countries, often under the pen name KAA. Their illustrations are influenced by the folk culture of Vietnam and Asia. They live in Vietnam.