The Kissing Bug: A True Story of a Family, an Insect, and a Nation's Neglect of a Deadly Disease (Hardcover) 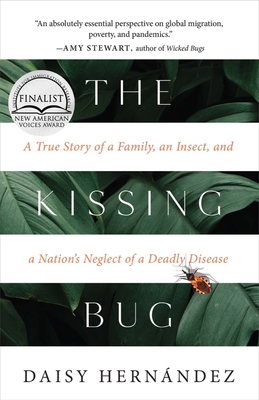 The Kissing Bug: A True Story of a Family, an Insect, and a Nation's Neglect of a Deadly Disease (Hardcover)

As heard on Fresh Air

A TIME, NPR, Chicago Public Library, Science for the People, WYNC, WBUR Radio Boston, and The Stacks Podcast Best Book of the Year

“Lyrical, unflinching. . . . Hernández expertly skates the line between memoir and science tome, showing the personal effects of a disease perpetuated by a cascade of systemic failures.” —The Washington Post

Growing up in a New Jersey factory town in the 1980s, Daisy Hernández believed that her aunt had become deathly ill from eating an apple. No one in her family, in either the United States or Colombia, spoke of infectious diseases. Even into her thirties, she only knew that her aunt had died of Chagas, a rare and devastating illness that affects the heart and digestive system. But as Hernández dug deeper, she discovered that Chagas—or the kissing bug disease—is more prevalent in the United States than the Zika virus.

After her aunt’s death, Hernández began searching for answers. Crisscrossing the country, she interviewed patients, doctors, epidemiologists, and even veterinarians with the Department of Defense. She learned that in the United States more than three hundred thousand people in the Latinx community have Chagas, and that outside of Latin America, this is the only country with the native insects—the “kissing bugs”—that carry the Chagas parasite.

Through unsparing, gripping, and humane portraits, Hernández chronicles a story vast in scope and urgent in its implications, exposing how poverty, racism, and public policies have conspired to keep this disease hidden. A riveting and nuanced investigation into racial politics and for-profit healthcare in the United States, The Kissing Bug reveals the intimate history of a marginalized disease and connects us to the lives at the center of it all.

Daisy Hernández has written for The New York Times, National Geographic, NPR’s All Things Considered and Code Switch, The Atlantic, Slate, and Guernica. Author of the award-winning memoir A Cup of Water Under My Bed and co-editor of Colonize This! Young Women of Color on Today’s Feminism, Hernández is an associate professor at Miami University in Ohio.
Lyrical, unflinching. . . . Hernández expertly skates the line between memoir and science tome, showing the personal effects of a disease perpetuated by a cascade of systemic failures.
— The Washington Post

A necessary read for anyone concerned about health crises across the world.
— The Boston Globe

Deftly reported. . . . a nuanced and empathetic look into the intersections of poverty, racism and the U.S. health?care system.
— TIME

Hernández raises damning questions about which infectious diseases get attention and whom we believe to be deserving of care.
— NPR Books

A trenchant work of investigative journalism. . . . weaving in cultural and political analysis, extensive research, and personal history as she chases down answers about her aunt’s tragic death from an underreported disease known as Chagas.
— Buzzfeed

She movingly profiles individual patients and. . . . the divergent fates experienced by [illness] sufferers of differing incomes, origins, and ethnicities.
— The New Yorker

Uncovers a story about the intersection of public health and discrimination, and a disease that will become even more virulent as climate change stretches the kissing bug habitat further north.
— Chicago Public Library

Raises questions on why a disease that kills tens of thousands a year is not more of a focus.
— NBC News

Compelling and impressive. . . . Hernández's lucid writing provides a paradigm for how to begin addressing the inequities baked into medicine.
— Shelf Awareness

A deeply personal, unsparing analysis of how neglected diseases disproportionately affect marginalized peoples in the world’s richest country—and why they need not.
— Kirkus Reviews

Blending family and medical history, this account is especially relevant in an era of pandemics.
— Library Journal

Traces the effects of Chagas on minority communities, revealing how poverty, racism, and public policy have intersected to disrupt adequate healthcare interventions.
— ALTA

The book is propulsive, fascinating, and tragic in equal parts, and in both style and substance it reminds us that the cold hard facts of medical science are never separate from humanity, or from our prejudices, or from our most intimate stories.
— Undark Magazine

An expansive account of poverty, race, and who we consider worthy of help as it relates to location-based medical ailments.
— Bitch Magazine

Engaging and dynamic. . . . A reader walks away from The Kissing Bug with more knowledge and empathy than they had before and a sense that something must be done to save lives.

This nuanced and timely take exposes a disease that silently harms hundreds of thousands, it also serves as a prescription for change in our public policies and health care system.
— Discover Magazine

Trace[s] some of the most pressing questions about race and the institutions that purport to save lives in the United States, all of it held together by Hernandez’s complicated love for her once-vibrant aunt.
— Jezebel

Through interviews with patients, doctors, and epidemiologists, Hernández weaves a narrative of the racial politics that overshadow modern healthcare.
— INSIDER

A lyrical hybrid of memoir and science reporting.
— LEAPS.ORG

The engrossing account of a family medical mystery that led to a compassionate investigation of an underattended disease.
— Foreword Reviews

Hernández writes to the heart of the story with immense tenderness, compassion, and intelligence. A riveting read.
— Angie Cruz, author of Dominicana

With The Kissing Bug, Daisy Hernández takes her place alongside great science writers like Rebecca Skloot and Mary Roach, immersing herself in the deeply personal subject of a deadly insect-borne disease that haunted her own family. It’s a tender and compelling personal saga, an incisive work of investigative journalism, and an absolutely essential perspective on global migration, poverty, and pandemics.

The Kissing Bug is a deft mix of family archaeology, parasite detective story, and American reckoning. A much-needed addition to the canon.

— Danielle Ofri, MD, PhD, author of When We Do Harm: A Doctor Confronts Medical Error

An engaging, eye-opening read for anyone looking to learn more about the human suffering caused by the collision of a parasite and years of neglect by the United States’ medical system.
— Kris Newby, author of Bitten