True Virtue: The Journey of an English Buddhist Nun (Paperback) 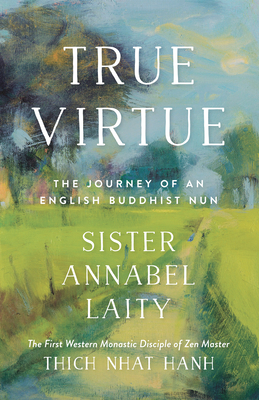 True Virtue: The Journey of an English Buddhist Nun (Paperback)

In 1988, Sister Annabel Laity became the first Western person to be ordained as a monastic disciple in Thich Nhat Hanh's Vietnamese Zen lineage. She was given the Dharma name Chan Duc, which means True Virtue. Thirty years later, Sister Annabel is a much-loved senior Dharma teacher in the Plum Village community. She teaches and leads retreats worldwide, and is widely recognized as an accomplished and insightful Buddhist scholar.

In this autobiography, Sister True Virtue shares the trials and joys of her lifelong search for spiritual community. First inspired by the kind Catholic nuns who ran her primary school, she encounters Buddhism while studying ancient languages at university in England. A few years later, when teaching classics in Greece, she meets a Tibetan Buddhist nun, an encounter that changes the course of her life and eventually leads her to her teacher, Thich Nhat Hanh, and to her spiritual home in Plum Village, Thich Nhat Hanh's practice center in France. True Virtue is a timeless testament to the importance of spiritual exploration, and offers a unique perspective on Thich Nhat Hanh's monastic community.
Sister Annabel Laity (Chan Duc, True Virtue) was born in England, and studied Classics and Sanskrit before going to India to study and practice with Tibetan nuns. She has been a disciple of Thich Nhat Hanh since 1986. In 1988, in India, she became the first Western European woman to be ordained as a nun by Thich Nhat Hanh. Sister Annabel was director of practice at Plum Village for many years. She travels widely, leading meditation retreats and inspiring many with her unique teaching style throughout the world. In 2000, she became the first Western/European nun to teach Buddhist Dharma in Thailand, and is currently head of practice at the European Institute of Applied Buddhism in Germany.
"I met Sister Annabel Laity when she helped organize Thich Nhat Hanh's first teaching tour to the United Kingdom more than 30 years ago now.… I have seen her transform from a shy young woman into a formidable teacher of the Dharma."
—Sister Chan Khong, cofounder of Plum Village Community of Engaged Buddhism and author of Learning True Love

"A first-hand account of the early years of Plum Village and the unfolding of Thich Nhat Hanh’s vision and the activities of the Order of Interbeing. Ven. Annabel recounts her early years as a monastic and her subsequent life helping Thay to realize his aspirations in spreading the cultivation of mindfulness and compassion in all directions throughout the world."
—Jetsunma Tenzin Palmo, author of Reflections on a Mountain Lake and subject of spiritual classic Cave in the Snow

"A poignant memoir … a powerful and much-needed reminder in these tumultuous times of the strength to be found in cultivating stillness and mindful attention to the present moment. A moving testament to the courage and deep compassion of those who follow Zen master Thich Nhat Hanh’s path of Engaged Buddhism in the world.”
—Christine Toomey, Amnesty International award-winning journalist and author of In Search of Buddha's Daughters

"A rich and timely book about the spiritual journey of a Western Buddhist nun.… The author details her spiritual encounters and her learning in an intimate and fluid way. We are fortunate to meet the life of True Virtue."
—Roshi Joan Halifax, Ph.D., founder and abbot of Upaya Zen Center and author of Standing at the Edge

"There are still so few full autobiographies of Buddhist women, and this one is a treasure, her luminous voice expressing the depth of her practice and the flavor of many decades steeped in the Dharma.”—Rev. Zenshin Florence Caplow, coeditor of The Hidden Lamp: Stories from Twenty-Five Centuries of Awakened Women"

"We are in dire need of more stories from accomplished female practitioners, showing us how they’ve managed to navigate the path. I’m grateful to Sister Annabel Laity for giving us a window into her spiritual evolution … from her childhood in England, to helping build a monastery in India, to the early days of Plum Village. Refreshingly forthright and practical … there’s much we can learn on these pages."—Andrea Miller, editor of Buddha's Daughters: Teachings from Women Who Are Shaping Buddhism in the West

"Sister Annabel lives and offers the dharma with grace, charm, and integrity. As a British Dharma teacher, I am full of gratitude for her support and wisdom.…"—Vari McLuskie, mindfulness trainer in leadership and organizational development

“A fascinating glimpse into the formation of a great teacher … touching, inspiring, and frank… Sister Annabel manifests a quality of deep authenticity and offers a beautiful example for teachers.” —Orlaith O’Sullivan, PhD, international coordinator for Wake Up Schools

"The simplicity of style and Sister Annabel’s authentic voice speak to you in a clear and sincere way through these pages as she cultivates the path of ‘peace in oneself and peace in the world.’”—Shantum Seth, Dharmacharya, Ahimsatrust.org, and pilgrimage guiding teacher, Buddhapath.com

"Honest, delightful.…  As the first Westerner to be ordained by Thich Nhat Hanh, her trailblazing spirit has allowed many monastic and lay practitioners alike to follow in her footsteps."—Sister Jina Chan Dieu Nghiem, Order of Interbeing senior Dharma teacher, former abbess of Plum Village Lower Hamlet

"A spiritual journey with many twists and turns.… Sister Annabel's candid remembrances of interbeing with Thich Nhat Hanh and his community are heartwarming, innocent, and evocative."
—Karma Lekshe Tsomo, Ph.D., cofounder of Sakyadhita International Association of Buddhist Women