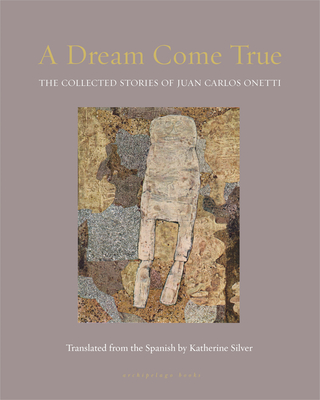 
Email or call for price
A Dream Come True collects the complete stories of Juan Carlos Onetti, presenting his existentialist, complex, and ironic style over the course of his writing career. Onetti was praised by Latin America's greatest authors, and regarded as an inventor of a new form and school of writing.

Juan Carlos Onetti's A Dream Come True depicts a sharp, coherent, literary voice, encompassing Onetti's early stages of writing and his later texts. They span from a few pages in "Avenida de Mayo - Diagonal - Avenida de Mayo" to short novellas, like the celebrated detective story "The Face of Disgrace" and "Death and the Girl," an existential masterpiece that explores the complexity of violence and murder in the mythical town of Santa María. His stories create a world of writing which is both universal and highly local, mediating between philosophical characters and the quotidian melodrama of Uruguayan villages.
Juan Carlos Onetti was born in Montevideo, Uruguay, but began writing in Buenos Aires in the late 1930s. He published short stories in La Nación and in the magazine Sur, founded by Victoria Ocampo and Jorge Luis Borges. He then proceeded to write novels centered around the imaginary town of Santa María, which he described through complex, poetic, and existentialist prose in "Los Astilleros," "Juntacadáveres," and "La vida breve." Due to Argentina's military dictatorship, he was exiled to Spain in 1976, where he worked as a writer for El País and several Latin American newspapers. His lyrical stories and compact novels awarded him the Cervantes Prize in 1980 and the Rodó Prize in 1991. About the translator: Katherine Silver has translated more than thirty books, mostly of literature from the Americas. Her translations include works by María Sonia Cristoff, Julio Ramón Ribeyro, Julio Cortázar, Daniel Sada, Horacio Castellanos Moya, César Aira, and Pedro Lemebel. She has received numerous awards and prizes, including three National Endowment of the Arts translation fellowships. She was recently translator-in-residence at the University of Iowa, and is the former director of the Banff International Literary Translation Centre.
Longlisted for the 2020 Best Translated Book Award

"In his quest to explore modern forms of being, Onetti also broke new formal ground. His books are complex ... reality itself devolves into a game of telephone ... [Onetti] writes violent, direct tales filled with intrigue and doom in the best manner of Conrad (the writer he most resembles) and even Faulkner (his great hero)." — The New York Times

"One of the greatest Latin-American writers of the twentieth century...In Onetti’s fiction, characters are forever in limbo, between the world they actually inhabit and the one they’d prefer to imagine for themselves...The first major English translation of his collected stories, A Dream Come True, brings the author’s talents into full view." — Jonathan Blitzer, New Yorker

"(Onetti's) works, like traditional mystery stories, are structured around a chain of clues, but the deductive method the detective uses to expose the criminal and motive here attempts to penetrate the characters’ inner torments, which collapse endlessly, one into the other, like a series of trap doors ... by 1940, with 'A Dream Come True,' (Onetti) had written a masterpiece." — Washington Examiner

"Onetti himself seems influenced by Poe by way of Baudelaire—but then filtered through William Burroughs, or perhaps B. Traven. The inhabitants of his imagined Santa María, a port city much like his native Montevideo, are a strange bunch, many of them German and Italian immigrants who are nowhere at home ... Onetti's stories are enigmatic and elegant ... All are strange—and mesmerizing. A welcome, overdue collection by a writer well deserving of his place in the Latin American canon." — Kirkus Reviews (Starred Review)

"In this standout collection, the Uruguayan Onetti, who died in 1994, masterly depicts the seedy disillusionment of characters in a South American backwater . . . There is a hint of Conrad in these misty tales that plunge beyond 'bare facts' and conjure up a world suffused with misanthropy and meditative irony. Readers will be bewitched." — Publishers Weekly (Starred Review)

"In Onetti, the entrance to this murky-watered world isn’t through the fantastic or the magical, like some of his Latin American contemporaries . . . His most unforgettable and sorrowful stories—“A Dream Come True,” “Most Dreaded Hell,” “The Face of Disgrace”—are realist narratives that seem to crush the modern hope of seeing everything. There’s a play between the affirmation and negation of reality—a subterranean current that seems to connect his work to Bolaño’s short stories." — Emilio Fraia

"In a bold gesture of defiance toward the current standardization of literary contents on reading lists, Archipelago Books has published A Dream Come True—Katherine Silver’s fearsomely loyal, clean, and brilliant translation of the complete short stories of Juan Carlos Onetti....Onetti was free of the continental love affair with abstract conclusions...his sentences never surrender their narrative vigor to aphoristic simplification...Onetti’s stories feel existential if one reads them in a loose way: extraordinarily well written theme-and-variations about senseless lives in a remote South American port. Nevertheless, as they accumulate in our memory, they distill a scary political meaning that contemporary Americans may find disquietingly familiar." — Àlvaro Enrigue, Bookpost

"The stories collected in this volume are sometimes slight but more often long and strikingly original, especially in the way time contracts and dilates and the plot veers off in unexpected directions. They are also more daring than the novels...These stories indicate the broad trajectory of Onetti's career. He was a clear-cut fabulist who turned into a cloudy mythmaker, but who stayed true to his primary vision of a provincial town in the winter rain." --Harper's Magazine

"Archipelago Books’ monumental collection of Onetti’s stories, A Dream Come True, spans over 54 years of the author’s dense and difficult to work...Onetti is never satisfied with any singular meaning...How fortunate, then, that Onetti has Katherine Silver rendering his absurd theatrics, a translator whose vocabulary and rhythm provide the engine of this collection...Onetti’s tone is perfectly deadpan, skewering the malaise of the young and rich, their poverty of thought, and their total indifference to humanity...this collection [has] a truly complete feeling." — Three Percent

"Time and circumstance, and the particular bend of prevailing literary history, have all but buried Onetti’s fiction in English. And if left unaccounted for, his work–to his readers in translation anyway–is perhaps in danger of being worn away. Onetti himself once admitted that his reign was not of this world; at the time, he hadn’t intended that to be a warning." — Jonathan Blitzer, The Nation

Onetti’s "stories and novels offer an intoxicating cocktail of solitude, frustrated desire, smoldering anger, defeat, and despair, invariably served with a twist. Somehow they cheer me up.” —Edwin Frank, in Words Without Borders

"Onetti is an underappreciated innovator of language. His style is bracing, but never clunky. His use of adjectives is staggering...It would be difficult to find a better pure stylist anywhere in the Spanish language...At a time when Latin American artists are reacting to widespread political violence across the region by rejecting fantasy and whimsy and being justifiably suspicious of totalizing, grandiose projects, it is only proper to look back to Onetti, an intensely skeptical writer whose structural innovations never got in the way of his fundamental task: reacting to life, reconstructing it in writing, peeling away the superfluous, and uncovering the essential." — Harvard Review

"Superb . . . While each of these stories stands on its own, they can be interpreted as the movements of a symphony that must be heard in its totality, focusing on its changes in tempo, counterpoints, and developments of recurring themes and characters." — Ana María Hernández, Literature and Arts of the Americas

"Every tale in (A Dream Come True) has the air of a detective story; it is guesswork. Characters tell tales, of themselves and of others; read traces and clues; listen to gossip; gather the pieces of the puzzling stories...When you read Onetti, you will find that time stops in order that you may explore its meaning. And at those moments, life will seem richer and more intense." — Christina Soto van der Plas, Public Books

"Onetti had the strange quality of being inimitable and at the same time creating an entire school of writing. All of his descendants, myself included, received from him a lesson on narrative intelligence, on wise construction, on an immense love to literary imagination, on risk and irony." - Carlos Fuentes

"Onetti is the first modern writer in our language...His world is a dark one, highly pessimistic, with a vision of the human condition that is profoundly desperate, and which we would reject if it didn't reach us with such a wonderful language...I can assure you that, without the great books that I've read, among which I can count Onetti's books, my life would have been infinitely poorer." - Mario Vargas Llosa

"Onetti is an epiphany, a celebration of beauty, of emotion and tenderness." - Antonio Muñóz Molina

"Onetti's writing is so good, a mere sentence by him will give you goosebumps. If I had to sell my soul to the devil in order to write a sentence in Spanish like someone else, I would think about very few authors: Borges, Onetti." - Carlos Gamerro

"Onetti's writing knew that literature is creation, that creation is reality and not repetition or recreation, that it is about finding a good story to tell and then tell it beautifully." - Carlos Liscano