Fight Like a Girl: 50 Feminists Who Changed the World (Paperback) 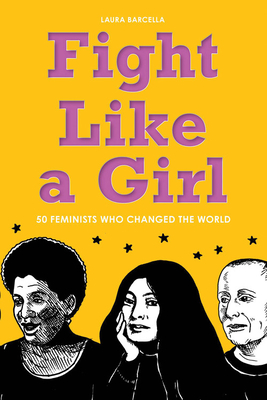 Fight Like a Girl: 50 Feminists Who Changed the World (Paperback)


Usually Ships in 1-5 Days
Nearly every day there’s another news story, think piece, or pop cultural anecdote related to feminism and women’s rights. Conversations around consent, equal pay, access to contraception, and a host of other issues are foremost topics of conversation in American media. And today’s teens are encountering these issues from a different perspective than any generation has before—but what’s often missing from the current discussion is an understanding of how we’ve gotten to this place. Fight Like a Girl introduces readers to the history of feminist activism in the U.S. in an effort to celebrate those who paved the way and draw attention to those who are working hard to further the feminist cause today.
Laura Barcella is a freelance writer and editor from Washington, D.C. She is a contributing editor at xoJane and a contributing writer at The Fix. She edited Madonna & Me: Women Writers on the Queen of Pop, an anthology of essays about Madonna by women writers, and is the author of a pop culture guide to the apocalypse called The End: 50 Apocalyptic Visions From Pop Culture That You Should Know About… Before It’s Too Late. Laura has written features, profiles, essays, and more for Salon, Esquire.com, the Village Voice, Cosmopolitan, Elle.com, Refinery29, the Chicago Sun-Times, Time Out New York, AlterNet, BUST, Elle Girl, CNN.com, and NYLON. An expert on pop culture, feminism, and lifestyles, she lives in San Francisco, California.

"The feminist history book everyone should read. . . Way cooler than any history book. . . Meant to be fun enough for both teens and adults to get into, the book educates readers not only about women’s rights, but also race and transgender rights, all of which are intertwined.”–Metro US

“Written for a young-adult audience, but it’s worth a read at any age. . . The real treasure of this book is the bibliography.  . . [It] will inspire further feminist exploration for years to come.” –Bust Magazine

“[A] snappy portrayal of feminist history. . . A worthy introduction of the feminist teen and an excellent choice for Women’s History Month.” --School Library Journal

"The inclusion of trans women, celebrity performers, and women who assert a lack of comfort with feminism add to the book’s inclusivity and make it even more likely to spur stimulating discussions."--Booklist

"Although Fight Like a Girl: 50 Feminists Who Changed the World is written especially for young adults and teenagers, adults will also find this biographical-snapshot compilation of women who dared to make the world a better place enlightening. . . Highly recommended.” --Children's Bookwatch

“[C]oncise but eloquent. . . [A] wide-ranging tribute to trailblazing women.”--Publishers Weekly