The Last Prince of Bengal: A Family's Journey from an Indian Palace to the Australian Outback (Paperback) 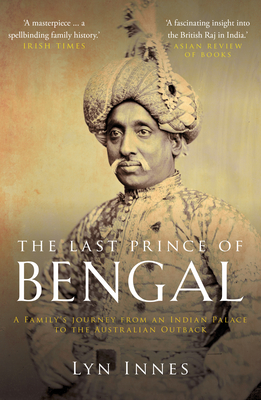 The Last Prince of Bengal: A Family's Journey from an Indian Palace to the Australian Outback (Paperback)


Coming Soon - Available for Pre-Order Now
The history of an Indian royal family's fall from power in the age of the British Empire.The Nawab Nazim was born into one of India's most powerful royal families, whose kingdom was three times the size of Great Britain. However, seen as a threat by the British authorities, he was forced to abdicate in 1880, his titles permanently abolished. The Nawab's change in fortune marked the end of an era in India.The Last Prince of Bengal tells the true story of the Nawab and his family as they sought by turns to befriend, settle in and eventually escape Britain. From glamourous receptions with Queen Victoria to a scandalous marriage with an English chambermaid; and from Bengal tiger hunts to sheep farming in the harsh Australian outback, Lyn Innes recounts her ancestors' extraordinary journey from royalty to relative anonymity.
Visiting the extremes of British rule in the age of empire, this is the compelling and intimate story of one family and their place in the defining moments of recent Indian, British and Australian history.
Lyn Innes is the great-granddaughter of His Royal Highness, the last Nawab Nizam of Bengal, Bihar and Orissa. Born and educated in Australia, she moved to North America and developed her interest in cultural nationalism, focusing on Irish, African, African American and Caribbean literatures. She earned a PhD from Cornell University and taught at the University of Massachusetts, Amherst, where she became associate editor of OKIKE: An African Journal of New Writing, founded by Chinua Achebe. Innes co-edited two volumes of African short stories with Achebe. Innes is currently Emeritus Professor of Postcolonial Literatures at the University of Kent, Canterbury.