Modern Calligraphy: The Workbook: A Practical Workbook to Help You to Practise Your Lettering and Calligraphy Skills (Paperback) 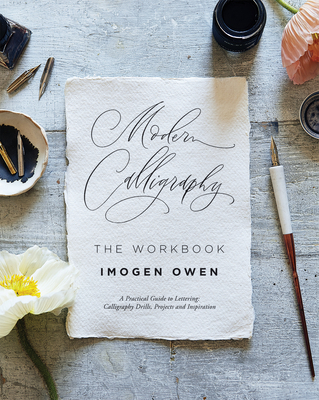 Modern Calligraphy: The Workbook: A Practical Workbook to Help You to Practise Your Lettering and Calligraphy Skills (Paperback)


On Our Shelves Now
Modern Calligraphy: The Workbook is a guide to the popular craft of calligraphy.

Starting with a lettering warm-up, Imogen Owen begins with the basics as she takes you through all the key steps to improve your skills.

With Imogen's careful guidance, practice your technique and build on your confidence as your work through the exercises – there is lots of space in the book as well as links to printable templates.

Modern Calligraphy: The Workbook is a companion book to Modern Calligraphy Workshop: The Creative Art of Pen, Brush and Chalk Lettering.
Imogen Owen runs her letterpress and lettering studio of the same name in the UK. Starting with designing and printing letterpress stationery, Imogen then started to see the beautiful modern calligraphy that was becoming popular in the US. Desperate to be able to do this, she ordered all the available supplies and set about teaching herself. Imogen taught the first modern calligraphy workshops in the UK and her courses continue to sell out. Imogen has worked with a range of high-profile clients and her work has been featured in numerous publications and blogs. Since Modern Calligraphy was published in 2017, Imogen has continued to build her brand, collaborating with brands including Chanel, Sony, and Fortnum & Mason.