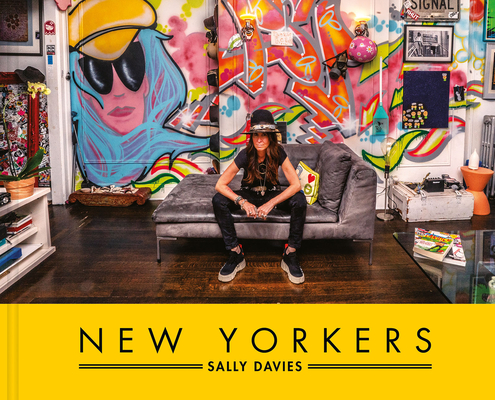 
Usually Ships in 1-5 Days
New Yorkers presents more than 70 intimate portraits of people in their apartments and studios—captured in unique style by renowned New York street photographer Sally Davies—along with their testimonies and tales, and their illuminating observations on what it means to be a New Yorker. Considering the origins and ambitions of its subjects, it captures an intoxicating glimpse of New York’s alternative scene before its actors are washed away on a wave of gentrification. A cast of drag artists, store owners, doctors, dog walkers, psychics, cab drivers, writers, artists, tattoo artists, gallery owners, photographers, film producers, designers, dancers, and musicians (including such legendary New Yorkers as Laurie Anderson, Danny Fields, and William Ivey Long) reveal the diversity, eccentricity, creativity, and humanity at the heart of this iconic city.
Sally Davies is a street photographer whose works are in the Museum of the City of New York and the NYC 9/11 Memorial Museum. She is the author of the acclaimed McDonalds Happy Meal project (1.5 million online hits) and her
archive is part of the Downtown Collection of Fales Library at NYU. She took Allen Ginsberg’s old apartment when she moved from Canada to New York in 1983, and she still lives in the East Village with her dog Bun.
"The book is an important contribution to the photographic arts and also to the annals of New York history." —Michael Ernest Sweet, F-Stop Magazine