Star Wars Adventures: The Weapon of a Jedi (Paperback) 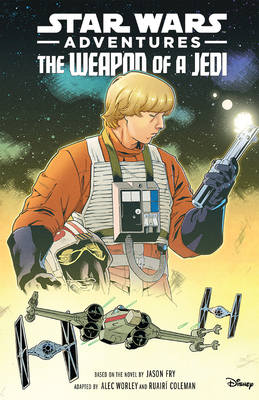 Star Wars Adventures: The Weapon of a Jedi (Paperback)


On Our Shelves Now
Discover an untold chapter in Luke Skywalker's journey from orphan to Jedi knight in this middle-grade graphic novel set between A New Hope and The Empire Strikes Back!

The Rebel Alliance has destroyed the Empire's dreaded Death Star, but the Imperial starfleet continues hunting the rebels throughout the galaxy. Luke Skywalker now seeks to support the Rebellion as an X-wing fighter. But as he flies with the pilots of the Red Squadron, Luke feels stirrings of the Force. And this farm boy turned fighter pilot begins to suspect that his destiny lies along a different path.

This middle-grade Star Wars adventure also foreshadows events to come in Episode VII: The Force Awakens!
Jason Fry is a writer, editor, and digital consultant based (inevitably) in Brooklyn, N.Y. He's written more than 40 books and short stories set in the Star Wars galaxy, as well as The Jupiter Pirates, a young-adult space-fantasy series. Besides fiction for adults and young readers, he writes essays and articles about technology, sports, online media, music, travel, history, and anything else that interests him. He previously spent nearly 13 years at The Wall Street Journal Online and has been blogging about baseball since 2005.


Ruairí Coleman is a comic artist who has worked for Marvel, IDW, and Dynamite, on titles like Star Wars, Cloak & Dagger, KISS/Army of Darkness, and Mars Attacks.