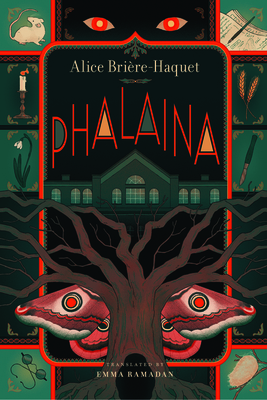 
On Our Shelves Now
We discover a new species of life form every day.
But, every day,
a species also disappears.

What we do know: someone is hot on her tail. And there's a lot of money at stake in finding out where exactly she comes from – and what exactly she is.

Concurrent to Manon's story are letters to Charles Darwin from Professor Humphrey, a scientist who has recently died under mysterious circumstances. Is it true that natural selection left humans at the top of the pyramid of life after all? Or in the process of evolution, was there something elemental that humans lost, something that connected us to the rest of life on earth? Who and what else is out there?

In order to stay alive, Manon must untangle the mystery of her origins, and perhaps the origins of humanity as well.

From French writer Alice Brière-Haquet and translated by PEN-award winning translator Emma Ramadan comes PHALAINA – the middle grade historical sci fi thriller you won't be able to put down.
Emma Ramadan translates books of all genres from French. She is the recipient of the PEN Translation Prize, the Albertine Prize, an NEA Fellowship, and a Fulbright for her work. Her recent translations include Abdellah Taïa's A Country for Dying, Kamel Daoud's Zabor, or the Psalms, and Anne Garréta's In Concrete.
[STAR] "With its attentions to the natural world and to the menaces of humanity, Phalaina is a luminous ecofable wrapped in an immersive, propulsive tale." -Foreword Reviews (starred)

“A novel of ideas cloaked in skulduggery and populated with textbook villains… an environmental message pertinent to the present.”- The Horn Book

“Young readers interested in evolutionary science will have much to ponder.” -Booklist

[STAR] “Brière-Haquet is fiendishly clever at looping subplots and timing clues in both the thriller and science plotlines, and her clinically cool narrative voice injects gravitas into the evolutionary discussion while placing a buffer of emotional distance between the reader and some truly gruesome off-stage mayhem." - Bulletin of the Center for Children's Books (starred)