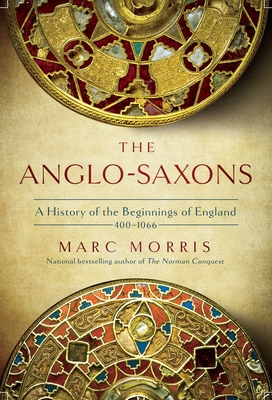 A sweeping and original history of the Anglo-Saxons by national bestselling author Marc Morris.

Sixteen hundred years ago Britain left the Roman Empire and swiftly fell into ruin. Grand cities and luxurious villas were deserted and left to crumble, and civil society collapsed into chaos. Into this violent and unstable world came foreign invaders from across the sea, and established themselves as its new masters.

The Anglo-Saxons traces the turbulent history of these people across the next six centuries. It explains how their earliest rulers fought relentlessly against each other for glory and supremacy, and then were almost destroyed by the onslaught of the vikings. It explores how they abandoned their old gods for Christianity, established hundreds of churches and created dazzlingly intricate works of art. It charts the revival of towns and trade, and the origins of a familiar landscape of shires, boroughs and bishoprics. It is a tale of famous figures like King Offa, Alfred the Great and Edward the Confessor, but also features a host of lesser known characters - ambitious queens, revolutionary saints, intolerant monks and grasping nobles. Through their remarkable careers we see how a new society, a new culture and a single unified nation came into being.

Drawing on a vast range of original evidence - chronicles, letters, archaeology and artefacts - renowned historian Marc Morris illuminates a period of history that is only dimly understood, separates the truth from the legend, and tells the extraordinary story of how the foundations of England were laid.
Marc Morris is a historian specializing in the Middle Ages. He is the author of A Great and Terrible King; King John; and the Wall Street Journal and USA Today bestselling The Norman Conquest. Marc lives in England.
“Medievalist Marc Morris has produced a deep dive into one of the murkiest ages in our national history. Morris is such an accomplished guide to the tricksy Anglo-Saxon world. Throughout this clever, lively book Morris leans enthusiastically into uncertainty, inviting the reader to figure out the puzzles with him. Much of the Anglo-Saxon world was wiped out by the Normans, but as Morris’s splendid new book shows, there is plenty we can still see, and enjoy, today.”
— Dan Jones

"Beginning with the desperate period when Roman rule had crumbled, Morris skillfully evokes each era of Anglo-Saxon England, the varying nature of the challenges facing its rulers and the crucial role, almost unimaginable to modern minds, that churchmen played in supporting and subverting its kings. Morris handles the grand narrative of Anglo-Saxon history well. Through this maze of chance, dynastic quarrels, abstruse ecclesiastical disputes and clashes of shield walls, Morris guides the reader with aplomb, providing a survey of Anglo-Saxon history that is both rounded and nuanced."
— The Literary Review

"An asbolute masterpiece . It feels like the missing piece of historiography on an essential period of our past.  Marc Morris is the platonic ideal of scholarly yet readable big history."
— Dan Snow, historian and broadcaster

"A rich trove of ancient wonders, worthy of many a night in the mead hall, listening to its telling! Yet it is also a book for our time.  Marc Morris is a genius of medieval narrative, and I am full of admiration."
— Ian Mortimer, author of THE OUTCASTS OF TIME and THE TIME TRAVELERS GUIDE TO RESTORATION BRITAIN

"The people and times are brought vividly back to life, allowing the reader to see, perhaps for the first time, the foundations of modern England.  A remarkable achievement. Marc's book will surely become a must-read for any student of English history, and particularly of this woefully overlooked, but vital, period."
— Justin Pollard, author of ALFRED THE GREAT: The Man Who Made England

"A welcome refreshment of a seminal era in the forging of the English identity."
— Kirkus Reviews

“Stunning in its action and drama, this book illuminates fully what turns out to have been a tangled and violent passage in history.”
— Kansas City Star, A Best Book of the Year (Praise for The Norman Conquest)

“Meticulous and absorbing. Where Morris’ book really excels is in its understanding of the conquest’s ramifications for the nation’s demographics, language, and ruling elite."
— Providence Journal, A Best Book of the Year (Praise for The Norman Conquest)

“A historian who specializes in the Middle Ages, especially that period’s monarchies and aristocracy, Morris takes thoroughness to new heights as he compares all the available sources in this valuable text. A thoroughly enjoyable book from an historian’s historian who can write for the masses.”
— Kirkus Reviews (starred) (Praise for The Norman Conquest)

"Medievalist Marc Morris has written an engaging account of turbulent times in a suitable and interesting style."
— The Arts Fuse