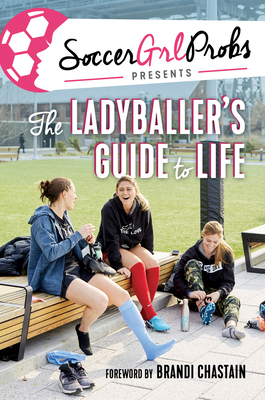 By SoccerGrlProbs, Brandi Chastain (Foreword by)


Usually Ships in 1-5 Days
Ladyballer (lay-DEE-bawl-er) (noun): A rare breed of awesome female athlete with an incredible passion for the game, a wardrobe consisting of tournament t-shirts, and an appetite fit for a hippopotamus.

Featuring hilarious and heartfelt experiences, plus tips on training, nutrition, motivation, balancing soccer with a social life, and choosing the right college, this book is for the girls with bruises, turf burns, and weird tan lines who always find themselves saying, "I can't, I have soccer!"
SoccerGrlProbs is a lifestyle brand founded by Long Island natives Alanna Locast, Shannon Fay, and Carly Beyar, all former teammates on the Fairfield University Division 1 Women’s Soccer team. With a mission to create original content and merchandise that celebrates and empowers female soccer athletes, SGP has produced over 140 videos that have accumulated over 23+ million views. Discover more at soccergrlprobs.com.
Brandi Chastain is a two-time FIFA Women’s World Cup champion, two-time Olympic gold medalist, coach, and sports broadcaster. She played for the United States national team from 1988 to 2004 and was inducted into the National Soccer Hall of Fame in March 2017.