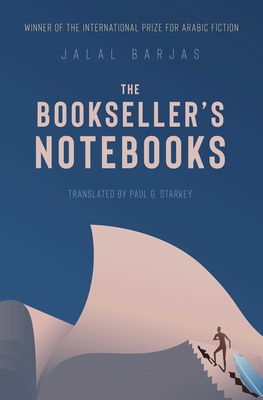 
On Our Shelves Now
Winner of the 2021 International Prize for Arabic Fiction—known as the "Arabic Booker Prize"— this novel explores themes of loneliness, homelessness, and mental illness.

After losing his job and refuge, Ibrahim al-Warraq, a bookseller, decides to live with the homeless people in his city and assuming the identities of the heroes of the novels he has read.

Set between 1947 and 2019, this novel is based on several notebooks of stories about people facing different hardships, such as losing their homes or not knowing who their families are. Their interwoven destinies reveal the value of the house, as a symbol of one’s homeland, as opposed to the surrounding ruination. The central character is Ibrahim the bookseller, a cultured man, and voracious reader of novels who takes on the identity of the protagonists in novels which appeal to him. He becomes a professional thief who robs banks and the very wealthy in order to help the abject poor and impose his own form of justice like Robin Hood. But due to his isolation, loneliness, and maltreatment by a cruel world, he suffers mental illness and descends into full schizophrenia. He attempts suicide, before meeting a mysterious woman who will change his life.

As events unfold, Barjas opens up many surprises for his reader, illustrating through his flawed characters the ruined state and complete emptiness of the world. In intensely poetic language, he throws light on a totally schizophrenic reality in his country, and brilliantly uses all the tools of emotional stress and engagement and of psychological exploration of human behavior that narration necessitates.
Jalal Barjas is an award-winning Jordanian poet and novelist, born in 1970. He is the author of two poetry collections, short stories, travel literature, and four novels. His novel Guillotine of the Dreamer (2013) won the Jordanian Rifqa Doudin Prize for Narrative Creativity in 2014, and Snakes of Hell won the 2015 Katara Prize for the Arabic Novel. His third novel Women of the Five Senses was longlisted for the International Prize for Arabic Fiction in 2019.

Paul G. Starkey has translated works by Adania Shibli, Mansoura Ez Eldin, Youssef Rakha, Edwar al-Kharrat, Mahmoud Shukair, and others. He was Winner of the 2015 Saif Ghobash Banipal Prize for his translation of The Book of the Sultan's Seal by Youssef Rakha.