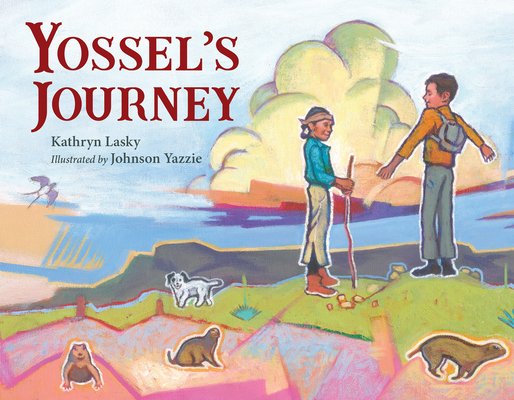 
Usually Ships in 1-5 Days
When Yossel’s family flees anti-Jewish pogroms in Russia and immigrates to the American Southwest, he worries about making a new home and new friends.

In his family's new store next to the Navajo reservation, Yossel watches neighbors pass through. He learns lots of Navajo (Diné) words, but he's still too afraid and lonely to try talking to anyone. Finally he meets Thomas, a Navajo boy just his age. Making new friends can be hard, especially when you're learning a new language to tell your jokes.

A historical picture book about the power of cross-cultural friendships and the joy of finding out the true meaning of home.

Kathryn Lasky is the acclaimed author of dozens of books for young readers, including Tumble Bunnies, Hatchling, the bestselling Guardians of Ga'Hoole series, and Sugaring Time, a Newbery Honor book. She lives in Cambridge, Massachusetts.
kathrynlasky.com

Born on the Navajo Nation in Pinon, Arizona, Johnson Yazzie's interest in creation began in childhood and led to a lifelong career in fine art as a painter, bronze sculptor, and illustrator. The Navajo word hózhó means balance, harmony, beauty. It is the word by which he lives.
Because the tsar is “sending his soldiers to hurt Jewish people,” eight-year-old Yossel’s family emigrates from Russia to America, traveling by train, boat, and covered wagon to New York City, then past Santa Fe to a town that borders a Navajo reservation. There, they run a trading post left to them by family, which is filled with “barrels of coffee and beans and seed.” Yossel learns “English and Navajo words for things like coffee and nails.... But I am afraid to speak.” When he meets an Indigenous boy his age, Thomas, they find ways to communicate and share—Yossel’s mother offers blintzes, and Thomas “shows me where the ghosts of Navajos live and where rattlesnakes sleep”—and then build a friendship that grows even closer when Yossel makes Thomas’s infant sibling laugh for the first time. Lines by Lasky (the Guardians of Ga’Hoole series) balance the feel of wide-open spaces and family comforts (“The smell of sagebrush meets the cinnamon of Mama’s honey cake”), while Navajo artist Yazzie’s acrylic paintings portray white-outlined characters and saturated landscapes that draw similarities between Russia and the American Southwest. An author’s note and further reading conclude but elide discussion of the U.S. government’s displacement of Navajo people. Ages 5–9.