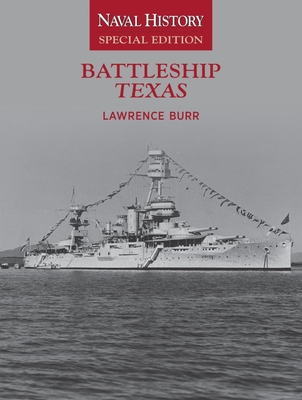 
Coming Soon - Available for Pre-Order Now
USS Texas BB-35, a Dreadnought era battleship launched in May 1912, served the U.S. Navy for thirty-four years, including World War I and World War II. World War I service included North Sea convoy duty for merchant ships from Scotland to Norway, and North Sea sweeps to counter potential forays by the German Fleet. The highlight service was escorting the German Fleet in its surrender sailing to the Firth of Forth with the Grand Fleet of the Royal Navy. As Flagship of the Pacific Fleet in the early 1930's, Texas led fleet maneuvers as part of the U.S. Navy problem exercises, which were a forerunner to the naval strategy used in the Pacific War. World War II service included neutrality patrols, escorting Atlantic convoys to Britain, and participation in the Operation Torch landings on North Africa where she bombarded enemy installations. USS Texas took a major role in the invasion of Normandy helping the U.S. Army break through at Omaha Beach, and then Cherbourg. Sailing to the Pacific, she participated in the bombardment of Iwo Jima and then Okinawa. Decommissioned in 1948, Battleship Texas became a state memorial and was designated a National Historic Landmark, located at the San Jacinto Battleground, near Houston. Her triple-expansion reciprocating steam engines have also been designated National Historic Engineering Landmarks. Recognizing the importance of preserving Battleship Texas, the Texas State Government transferred the management of the ship to the Battleship Texas Foundation and allocated $32 million dollars for the enhanced preservation of the ship.
Lawrence Burr returned to the United States after a thirty-year-career as an international executive in Europe, Asia, and Australia. He partnered with Innes McCartney, approached Channel 4 in the UK and originated and co-produced the documentary, Jutland: Clash of the Dreadnoughts. Burr has now written six books on naval history.