The Inkwell Chronicles: The Ink of Elspet, Book 1 (Hardcover) 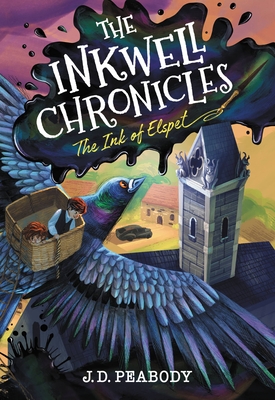 The Inkwell Chronicles: The Ink of Elspet, Book 1 (Hardcover)


On Our Shelves Now
Immerse yourself in this fast-paced middle-grade fantasy about magic ink, a secret society, and a boy who yearns to make his mark.

When their father goes missing after a mysterious train crash, Everett and his little sister Bea find a curious pen in his belongings, and its magical Ink begins to rewrite their once-ordinary lives. The Ink leads them to a world they never knew existed—one teeming with impossible magic, formidable allies, and villains who are determined to destroy everything they hold dear. Together, Everett and Bea embark on an adventure through secret tunnels in England and Scotland to find and protect the last Inkwell, and ultimately to save their father. But in order to do so, Everett must find a way to tap into the most magical power of all: his courage. Perfect for fans of The Silver Arrow, the Bookwanderers, and Inkheart, this classic battle of good and evil pits creativity against the forces that would seek to blot it out for good.

J.D. Peabody has been honing his storytelling skills since childhood, in contexts as varied as advertising, song lyrics, screenplays and sermons. He is thrilled to have The Inkwell Chronicles mark his debut venture into children’s literature. He and his wife live in the rainy but beautiful Pacific Northwest. J.D. is also the author of Perfectly Suited: The Armor of God for the Anxious Mind.

Action-packed and full of imaginative worldbuilding, the story’s stakes are palpable. Readers will enjoy spotting literary references to works such as Alice’s Adventures in Wonderland and A Wrinkle in Time.—Kirkus Reviews

Both nostalgic and inventive, the story is charming, and the magic compelling. A fantastic read-aloud.—Jordan Stratford, author of the Wollstonecraft Detective Agency series

This magical adventure pits brave young heroes and their loyal allies against some truly wicked villains, and is sure to inspire readers young and old. I loved it, and can’t wait for more Inkwell Chronicles! —Elizabeth C. Bunce, Edgar Award-winning author of the Myrtle Hardcastle Mysteries

Aided by a trio of delightfully eccentric authors (famed “Inklings” C.S. Lewis, J.R.R. Tolkien and Dorothy Sayers), a brother and sister embark on a heroic quest to find their abducted father. Buckle up for a breath-taking joyride through a magical world filled with inky darkness and shimmering light. J.D. Peabody has penned a luminous tale. A tour de force of the imagination. An astonishing debut.—Conrad Wesselhoeft, author of Dirt Bikes, Drones, and Other Ways to Fly