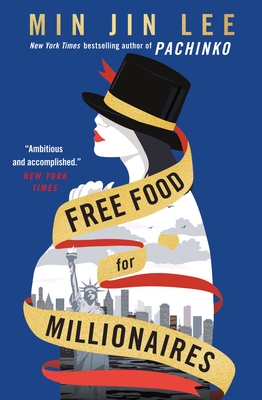 
On Our Shelves Now
In this "mesmerizing" novel from the New York Times bestselling author of Pachinko, the Korean-American daughter of first-generation immigrants strives to join Manhattan's inner circle (USA Today).

Meet Casey Han: a strong-willed, Queens-bred daughter of Korean immigrants immersed in a glamorous Manhattan lifestyle she can't afford. Casey is eager to make it on her own, away from the judgements of her parents' tight-knit community, but she soon finds that her Princeton economics degree isn't enough to rid her of ever-growing credit card debt and a toxic boyfriend. When a chance encounter with an old friend lands her a new opportunity, she's determined to carve a space for herself in a glittering world of privilege, power, and wealth-but at what cost?

Set in a city where millionaires scramble for the free lunches the poor are too proud to accept, this sharp-eyed epic of love, greed, and ambition is a compelling portrait of intergenerational strife, immigrant struggle, and social and economic mobility. Addictively readable, Min Jin Lee's bestselling debut Free Food for Millionaires exposes the intricate layers of a community clinging to its old ways in a city packed with haves and have-nots.

Includes a Reading Group Guide.
Min Jin Lee is a recipient of fellowships in Fiction from the Guggenheim Foundation (2018) and the Radcliffe Institute for Advanced Study at Harvard (2018-2019). Her novel Pachinko (2017) was a finalist for the National Book Award for Fiction, a runner-up for the Dayton Literary Peace Prize, winner of the Medici Book Club Prize, and was one of the New York Times' "Ten Best Books of 2017." A New York Times bestseller, Pachinko was also one of the "Ten Best Books" of the year for BBC and the New York Public Library, and a "best international fiction" pick for the Canadian Broadcasting Corporation. In total, it was on over seventy-five best books of the year lists, including NPR, PBS, and CNN, and it was a selection for Now Read This, the joint book club of PBS NewsHour and the New York Times. Pachinko was translated into twenty-seven languages. Lee's debut novel Free Food for Millionaires (2007) was one of the best books of the year for the Times of London, NPR's Fresh Air, and USA Today, and it was a national bestseller. Her writings have appeared in the New Yorker, NPR's Selected Shorts, One Story, the New York Review of Books, the New York Times Magazine, the New York Times Book Review, the Times Literary Supplement, the Guardian, Condé Nast Traveler, the Times of London, andthe Wall Street Journal. Lee served three consecutive seasons as a Morning Forum columnist of the Chosun Ilbo of South Korea. In 2018, she was named as one of Adweek's Creative 100 for being one of the "ten writers and editors who are changing the national conversation," and one of the Guardian's Frederick Douglass 200. She received an honorary doctor of humane letters degree from Monmouth College. She was a Writer-in-Residence at Amherst College from 2019-2022.
“Lee’s keen eye for class concerns and her confident, muscular writing about the conflicting pulls toward one’s cultural heritage and the unknowable, wide- open future make this book a pleasure.”—Meg Wolitzer, New York Times bestselling author of The Interestings

“Engrossing and illuminating . . . a panoramic portrait of contemporary Korean Americans and their ‘white boy’ colleagues, lovers, and friends.”—Alix Kates Shulman, author of Memoirs of an Ex-Prom Queen and Drinking the Rain

“Unfolds in New York in the 1990s with an energetic eventfulness and a sprawling cast that call to mind the literary classics of Victorian England . . . It would be remarkable if she had simply written a long novel that was as easy to devour as a nineteenth-century romance—packed with tales of flouted parental expectations, fluctuating female friendships and rivalries, ephemeral (and longer-lasting) romantic hopes and losses, and high-stakes career gambles. But Lee intensifies her drama by setting it against an unfamiliar backdrop: the tightly knit social world of Korean immigrants, whose children strive to blend into their American foreground without clashing with their distinctive background. It’s a feat of coordination and contrast that could kill a chameleon, but Lee pulls it off with conviction.”—New York Times Book Review

“Complex and intriguing . . . an exquisite look at life’s uncertainties. The beauty of Lee’s novel is that it does not focus solely on Casey’s sojourn from naïve pride to self-realization, as compelling as that is.”—Associated Press

"Mesmerizing...Not since Jhumpa Lahiri's The Namesake has an author so exquisitely evoked what it's like to be an immigrant."—USA Today

“A terrific debut novel . . . reminiscent of another ambitious New York novel about class collision, Tom Wolfe’s Bonfire of the Vanities . . . the pleasure of reading this sprawling novel derives from the old-fashioned thrill of watching the wheel of fortune slowly turn for various characters . . . In the Victorian-inflected saga of Casey Han and her friends, Lee has given readers more than just Elizabeth Bennet tricked out in a Korean hanbok, she’s tweaked venerable nineteenth-century fictional forms to suit the story of yet another new immigrant group claiming New York City as its own.”—Maureen Corrigan, Fresh Air, NPR

"Lee has updated the Victorian novel of progress to a postmodern, postfeminist world and imagined a character whose circumstances feel universal."—Chicago Tribune

"A first-rate read—a book you finish feeling certain the lives inside will go on long after the final page.”—People

"This big, beguiling book has all the distinguishing marks of a Great American novel."—The Times, London

"In Lee's deft hands . . . pages pass as effortlessly as time."—BookPage