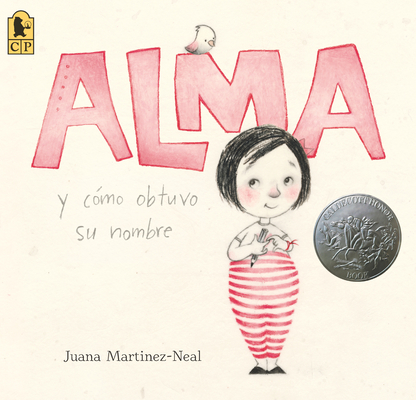 What’s in a name? For one little girl, her very long name tells the vibrant story of where she came from — and who she may one day be. Spanish language edition!

If you ask her, Alma Sofia Esperanza José Pura Candela has way too many names: six! Just think of how hard it is to fit them all on the back of a little photo. How did such a small person wind up with such a large name? Alma turns to Daddy for an answer and learns of Sofia, the grandmother who loved books and flowers; Esperanza, the great-grandmother who longed to travel; José, the grandfather who was an artist; and other namesakes too. As she hears the story of her name, Alma starts to think it might be a perfect fit after all — and realizes that she will one day have her own story to tell. In her author-illustrator debut, Juana Martinez-Neal opens a treasure box of discovery for children who may be curious about their own origin or name story.
Juana Martinez-Neal is the Peruvian-born daughter and granddaughter of painters. Her debut as an author-illustrator, Alma and How She Got Her Name, was awarded a Caldecott Honor and was published in Spanish as Alma y cómo obtuvo su nombre. She also illustrated La Princesa and the Pea by Susan Middleton Elya, for which she won a Pura Belpré Illustrator Award, Babymoon by Hayley Barrett, Swashby and the Sea by Beth Ferry, and Fry Bread: A Native American Family Story by Kevin Noble Maillard, which won a Robert F. Sibert Medal. Juana Martinez-Neal lives in Connecticut with her family. Visit her online at www.juanamartinezneal.com.