The Chancellor: The Remarkable Odyssey of Angela Merkel (Hardcover) 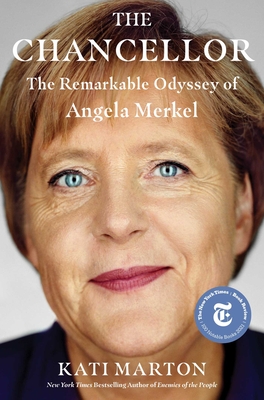 The Chancellor: The Remarkable Odyssey of Angela Merkel (Hardcover)


Usually Ships in 1-5 Days
The “captivating” (The New York Times), definitive biography of German Chancellor Angela Merkel, detailing the extraordinary rise and political brilliance of the most powerful—and elusive—woman in the world.

Angela Merkel has always been an outsider. A pastor’s daughter raised in Soviet-controlled East Germany, she spent her twenties working as a research chemist, entering politics only after the fall of the Berlin Wall. And yet within fifteen years, she had become chancellor of Germany and, before long, the unofficial leader of the West.

In this “masterpiece of discernment and insight” (The New York Times Book Review), acclaimed biographer Kati Marton sets out to pierce the mystery of Merkel’s unlikely ascent. With unparalleled access to the chancellor’s inner circle and a trove of records only recently come to light, she teases out the unique political genius that had been the secret to Merkel’s success. No modern leader so ably confronted Russian aggression, enacted daring social policies, and calmly unified an entire continent in an era when countries are becoming more divided. Again and again, she cleverly outmaneuvered strongmen like Putin and Trump, and weathered surprisingly complicated relationships with allies like Obama and Macron.

Famously private, the woman who emerges from this “impressively researched” (The Wall Street Journal) account is a role model for anyone interested in gaining and keeping power while staying true to one’s moral convictions. At once a “riveting” (Los Angeles Review of Books) political biography, an intimate human portrait, and a revelatory look at successful leadership in action, The Chancellor brings forth one of the most extraordinary women of our time.
Kati Marton is the New York Times bestselling author of nine books, including True Believer: Stalin’s Last American Spy and Enemies of the People: My Family’s Journey to America, which was a finalist for the National Book Critics Circle Award. An award-winning former NPR correspondent and ABC News bureau chief in Germany, she was born in Hungary and lives in New York City.
“Captivating.”
—Michelle Goldberg, The New York Times

“A masterpiece of discernment and insight.”
—The New York Times Book Review

“Kati Marton has come closer than anyone to unlocking the mystery of Angela Merkel, the most important politician of the twenty-first century.”
—George Packer, National Book Award-winning author of Last Best Hope

“Kati Marton’s cogent and penetrating portrait of Angela Merkel will change our understanding of the most powerful woman in the world. With a rare grasp of the subtleties of global politics, Marton explains how an unassuming science PhD from East Germany emerged to save the Western Alliance. It’s a thrilling tale, skillfully told.”
—Jonathan Alter, New York Times bestselling author of His Very Best

“To understand how we can protect democracy in an era of populist and authoritarian upheaval, we need to understand Angela Merkel. Kati Marton has produced an intimate, insightful portrait of an extraordinarily private leader, who, in her quiet and determined way, made Germany the economic and moral leader of Europe.”
—Walter Isaacson, New York Times bestselling author of The Code Breaker

“Impressively researched… with deftly drawn depictions of Ms. Merkel’s early years, personality and daily working life, depictions made all the more interesting by how little most of the public knows about what makes Ms. Merkel tick.”
—The Wall Street Journal

“The private Merkel also makes an appearance in this biography, with accounts of her marriages, her love of music and nature, and her sense of humor on full display. After finishing the book, readers will likely feel that the description of Merkel as “elusive” no longer serves... [I]t takes a writer of Marton’s caliber to reveal what has been in front of us the whole time.”
—Christian Science Monitor

“A compelling and memorable portrait. Angela Merkel’s life is a testament to the power of commitment, diligence, and the possibilities of politics. The Chancellor tells that story with insight and grace.”
—Jon Meacham, Pulitzer Prize-winning author of His Truth is Marching On

“It’s instructive to spend time in Merkel’s competent and humane company… [Marton] has doggedly retraced Merkel’s trail, and the story she brings is a good one.”
—Dwight Garner, The New York Times

“With her signature superpowers of rigorous research and unparalleled empathy, Marton brings us deep into the private sphere of Angela Merkel.”
—Eliza Griswold, Pulitzer Prize-winning author Amity and Prosperity

“This smart, readable biography chronicles Merkel’s remarkable odyssey... knit from a thousand threads of details revealed over the years.”
—Susan Page, USA Today (3 1/2 out of 4 stars)

“This is the best English-language biography of her rise from a tough and traditional family, through her career as a physical chemist in communist East Germany, to her current renown.”
—Foreign Affairs

“A fascinating picture of a powerful woman whose repeated denigration of power only concealed how wedded she was to power as a means of getting her own way.”
— London Times Literary Review

“Marton… [has] obtained a remarkable degree of access to the chancellor’s inner circle… Merkel emerges as a sympathetic and down-to earth figure… [and] winningly independent-minded.”
—The Times (UK)

“We need many more Angela Merkels in the world; aspiring leaders should start with this book.”
—Anne-Marie Slaughter, CEO, New America

“Definitive and brilliantly written, The Chancellor reads like a mystery, as if we didn’t yet know the outcome. This is the biography for history!”
—Volker Schlöndorff, Academy Award-winning director of The Tin Drum

“Marton’s beautifully written, balanced and insightful biography should be enjoyed by anyone interested in global politics or a fascinating life story.”
—BookPage (starred review)