From Scratch: A Memoir of Love, Sicily, and Finding Home (Paperback) 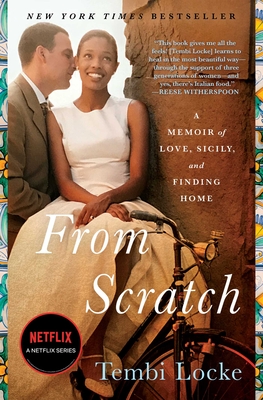 From Scratch: A Memoir of Love, Sicily, and Finding Home (Paperback)


On Our Shelves Now
This Reese Witherspoon Book Club Pick and New York Times bestseller is “a captivating story of love lost and found” (Kirkus Reviews) set in the lush Sicilian countryside, where one woman discovers the healing powers of food, family, and unexpected grace in her darkest hours.

It was love at first sight when actress Tembi met professional chef, Saro, on a street in Florence. There was just one problem: Saro’s traditional Sicilian family did not approve of his marrying a black American woman. However, the couple, heartbroken but undeterred, forged on. They built a happy life in Los Angeles, with fulfilling careers, deep friendships, and the love of their lives: a baby girl they adopted at birth. Eventually, they reconciled with Saro’s family just as he faced a formidable cancer that would consume all their dreams.

From Scratch chronicles three summers Tembi spends in Sicily with her daughter, Zoela, as she begins to piece together a life without her husband in his tiny hometown hamlet of farmers. Where once Tembi was estranged from Saro’s family, now she finds solace and nourishment—literally and spiritually—at her mother-in-law’s table. In the Sicilian countryside, she discovers the healing gifts of simple fresh food, the embrace of a close knit community, and timeless traditions and wisdom that light a path forward. All along the way she reflects on her and Saro’s romance—an incredible love story that leaps off the pages.

In Sicily, it is said that every story begins with a marriage or a death—in Tembi Locke’s case, it is both. “Locke’s raw and heartfelt memoir will uplift readers suffering from the loss of their own loved ones” (Publishers Weekly), but her story is also about love, finding a home, and chasing flavor as an act of remembrance. From Scratch is for anyone who has dared to reach for big love, fought for what mattered most, and those who needed a powerful reminder that life is...delicious.
Tembi Locke is an accomplished actor who has appeared in over sixty television shows and films, including The Magicians, NCIS: LA, Animal Kingdom, and Dumb and Dumber To. She is also a TEDx speaker. Her talk, What Forty Steps Taught Me About Love and Grief, traces her journey as a cancer caregiver. She is the creative voice behind The Kitchen Widow, an online grief support community that has received mentions in The New York Times and The Guardian. The author of From Scratch, she lives in Los Angeles with her young daughter, but can be found each summer on the island of Sicily.
“This beautiful memoir takes us on Tembi’s personal journey of love, parenthood, and ultimately the loss of her husband, Saro. She learns to heal in the most beautiful way—through the support of three generations of women—and yes, there’s Italian food. Lots and lots of Italian food!”—Reese Witherspoon

“An utterly incandescent love story. Tembi Locke has written a deeply personal tale brimming with hope and inspiration. There is both great beauty to be found within loss, and also the opportunity for transformation for those who let life truly break them open. In this unforgettable memoir, Tembi shows us how powerful—and ultimately uplifting—that journey can be. You will be forever changed for having turned these pages.” —Claire Bidwell Smith, author of Anxiety: The Missing Stage of Grief

"How does your love for your husband grow as a newlywed, a wife, a caregiver, and a young widow? How do you survive a love that was worth waiting for out in the rain? To try, Tembi Locke climbs volcanoes, cooks, and communes with her husband’s family in a small town in Italy. Sicily, A Love Story is a heartbreaking, but reassuring memoir of forgiveness. And Locke is a strong, joyful woman; a veteran actor who it turns out is a poet." —Helen Ellis, bestselling author of American Housewife

“A marvelous memoir about taking chances, finding love, and building a home away from home. In Sicily, a Love Story, Tembi Locke writes movingly about loss, grief, and the healing miracle of food.” —Laila Lalami, author of The Moor's Account.

“Tembi Locke's moving, vivid memoir is an epic cross-cultural romance, a tragedy, a tale of self-discovery and, best of all, a testament to the simple healing powers of good food.” —Shelf Awareness

“Actress and TEDx speaker Locke movingly describes the process of grieving and finding solace during three summers in Italy after the death of her husband...Locke’s raw and heartfelt memoir will uplift readers suffering from the loss of their own loved ones.” —Publishers Weekly