An Enchantment of Ravens (Paperback) 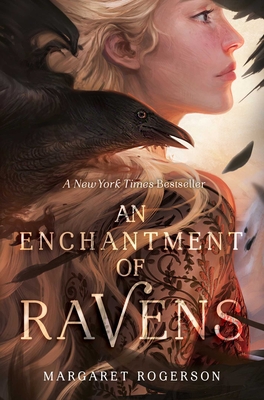 An Enchantment of Ravens (Paperback)

A skilled painter must stand up to the ancient power of the faerie courts—even as she falls in love with a faerie prince—in this gorgeous bestseller that’s “an ideal pick for fans of Holly Black, Maggie Stiefvater, and Laini Taylor” (Publishers Weekly, starred review).

Isobel is an artistic prodigy with a dangerous set of clients: the sinister fair folk, immortal creatures who cannot bake bread or put a pen to paper without crumbling to dust. They crave human Craft with a terrible thirst, and Isobel’s paintings are highly prized. But when she receives her first royal patron—Rook, the autumn prince—she makes a terrible mistake. She paints mortal sorrow in his eyes—a weakness that could cost him his life.

Furious, Rook spirits her away to his kingdom to stand trial for her crime. But something is seriously wrong in his world, and they are attacked from every side. With Isobel and Rook depending on each other for survival, their alliance blossoms into trust, then love—and that love violates the fair folks’ ruthless laws. Now both of their lives are forfeit, unless Isobel can use her skill as an artist to fight the fairy courts. Because secretly, her Craft represents a threat the fair folk have never faced in all the millennia of their unchanging lives: for the first time, her portraits have the power to make them feel.
Margaret Rogerson is the author of the New York Times bestsellers An Enchantment of Ravens, Sorcery of Thorns, and Vespertine. She has a bachelor’s degree in cultural anthropology from Miami University. When not reading or writing she enjoys sketching, gaming, making pudding, and watching more documentaries than is socially acceptable (according to some). She lives near Cincinnati, Ohio, beside a garden full of hummingbirds and roses. Visit her at MargaretRogerson.com.
* "Rogerson ably builds this fantasy world through canny details and contemporary dialogue, allowing for an enjoyable read by fantasy and non-fantasy readers alike. She also craftily depicts the power imbalance between Isobel and Rook, offering a refreshing dynamic in which Isobel often comes out on top. ­VERDICT A funny, action-packed, and sweet romance sure to appeal to fans of Holly Black, Diana Wynne Jones, and Sarah J. Maas."

* "Rogerson turns forbidden love into fresh adventure with danger, chases, a glorious ball, and unexpected narrative turns. Readers will delight in her interpretation of classic fairy themes and lore, and in the humor laced into the story...An ideal pick for fans of Holly Black, Maggie Stiefvater, and Laini Taylor."

"An Enchantment of Ravens offers a beautifully built world and swiftly paced adventure with exactly the right amount of danger, heroics and romance."

"Rogerson’s deft way with words and world building lifts tension and interest to a high point. An excellent choice for fans of Holly Black and Neil Gaiman."

"Rogerson draws on fairy lore while changing myriad details to suit her story, and in Isobel she provides a strong, confident heroine who may lose her heart but never her head. No glamour is needed to make readers fall for this one."

"This fabulous, flowing read will engage readers quickly and many will not be able to put it down. The forbidden, romantic tension, fast-paced action sequences, and engaging narrative…will make this book a first choice."

"The setting is deftly conveyed through dialogue and character interactions, thus avoiding any heavy exposition, and Rogerson keeps a nice balance between the development of Isobel and Rook’s relationship and the action of the plot. The book’s final clash between faerie and mortal is thrilling, but the motivations of the major villain have a touching resonance with Isobel and Rook’s inescapable reality as mortal and immortal lovers. Fans of May’s The Falconer (BCCB 6/14) will happily flock to this tale"