Holocaust Cinema Complete: A History and Analysis of 400 Films, with a Teaching Guide (Paperback) 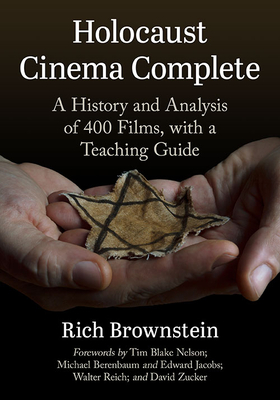 Holocaust Cinema Complete: A History and Analysis of 400 Films, with a Teaching Guide (Paperback)

Holocaust movies have become an important segment of world cinema and the de-facto Holocaust education for many. One quarter of all American-produced Holocaust-related feature films have won or been nominated for at least one Oscar. In fact, from 1945 through 1991, half of all American Holocaust features were nominated. Yet most Holocaust movies have fallen through the cracks and few have been commercially successful. This book explores these trends--and many others--with a comprehensive guide to hundreds of films and made-for-television movies. From Anne Frank to Schindler's List to Jojo Rabbit, more than 400 films are examined from a range of perspectives--historical, chronological, thematic, sociological, geographical and individual. The filmmakers are contextualized, including Charlie Chaplin, Sidney Lumet, Steven Spielberg, Quentin Tarantino and Roman Polanski. Recommendations and reviews of the 50 best Holocaust films are included, along with an educational guide, a detailed listing of all films covered and a four-part index-glossary.
After a career in Hollywood, Rich Brownstein has become a leading international expert concerning the history and use of Holocaust films. He has lectured for Yad Vashem's International School for Holocaust Studies in Jerusalem, Israel, since 2014.