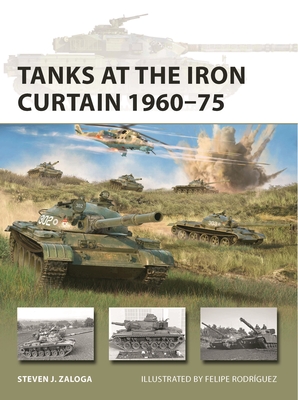 A new analysis of the technology and tanks that faced off against each other on opposite sides of the Iron Curtain, during the very height of the Cold War.

From the 1960s onwards, there was a generational shift in tank design and warfare with the advent of CBR (chemical, biological, radiological) protection and a move away from HEAT ammunition to APFSDS. This shift confronted the growing threat of guided anti-tank missiles and saw the introduction of composite armor. Soviet heavy tanks and tank destroyer/assault guns became obsolete, giving way to the technological might of the T-62 and T-64, while NATO forces employed the Chieftain, AMX-30, Leopard I, and M60, plus the initial attempt at a common US-German tank, the MBT-70.

Using detailed illustrations and contemporary photographs, this companion volume to NVG 301, Tanks at the Iron Curtain 1946–60 focuses on key battle tanks and their technology to give a comprehensive overall picture of how tanks developed during modern times.

Steven J. Zaloga received his BA in History from Union College and his MA from Columbia University. He has worked as an analyst in the aerospace industry for four decades, covering missile systems and the international arms trade, and has served with the Institute for Defense Analyses, a federal think tank. He is the author of numerous books on military technology and history, including NVG 294 Allied Tanks in Normandy 1944 and NVG 283 American Guided Missiles of World War II. He currently lives in Maryland, USA.

Felipe Rodríguez Náñez (aka Felipe Rodna) was born in 1976, and lives with his wife and two sons in Salamanca, Spain, where he works as an architect and computer graphics artist. He combines his experience in CG art and his passion for modelling in his illustrations, where he looks for a good balance between technical detail and craft.

"This is an easy-to-read volume stacked with great images of cold war tanks, this is definitely a book worth picking up especially war gamers wo either play or plan to play A Cold War gone hot scenario." -Jason Hubbard, Irregular Magazine