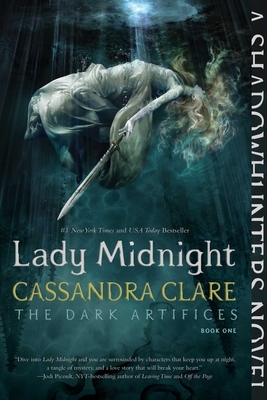 This is book number 1 in the The Dark Artifices series.

The Shadowhunters of Los Angeles star in this #1 New York Times and USA TODAY bestselling novel in Cassandra Clare’s newest series, The Dark Artifices, a sequel to the internationally bestselling Mortal Instruments series. Lady Midnight is a Shadowhunters novel.

It’s been five years since the events of City of Heavenly Fire that brought the Shadowhunters to the brink of oblivion. Emma Carstairs is no longer a child in mourning, but a young woman bent on discovering who killed her parents and avenging her losses.

Together with her battle partner Julian Blackthorn, Emma must learn to trust her head and her heart as she investigates a demonic plot that stretches across Los Angeles, from the Sunset Strip to the enchanted sea that pounds the beaches of Santa Monica. If only her heart didn’t lead her in treacherous directions…

Making things even more complicated, Julian’s brother Mark—who was captured by the faeries five years ago—has been returned as a bargaining chip. The faeries are desperate to find out who is murdering their kind—and they need the Shadowhunters’ help to do it. But time works differently in faerie, so Mark has barely aged and doesn’t recognize his family. Can he ever truly return to them? Will the faeries really allow it?

Glitz, glamours, and Shadowhunters abound in this heartrending opening to Cassandra Clare’s Dark Artifices series.
Cassandra Clare is the author of the #1 New York Times, USA TODAY, Wall Street Journal, and Publishers Weekly bestselling Shadowhunter Chronicles. She is also the coauthor of the bestselling fantasy series Magisterium with Holly Black. The Shadowhunter Chronicles have been adapted as both a major motion picture and a television series. Her books have more than fifty million copies in print worldwide and have been translated into more than thirty-five languages. Cassandra lives in western Massachusetts with her husband and three fearsome cats. Visit her at CassandraClare.com. Learn more about the world of the Shadowhunters at Shadowhunters.com.
"Positively aquiver with secret ardor and murderous zeal."
— Kirkus

"Clare delivers spectacular Shadowhunter fare with her trademark street tough yet emotionally fragile adolescent characters taking on adult roles and includes plenty of violent action and passionate romance to satisfy fans of “The Infernal Devices” and “The Mortal Instruments” series, who will be thrilled to see some of their favorite characters from the previous books make appearances."
— School Library Journal