The Ultimate Book of Big Cats: Your guide to the secret lives of these fierce, fabulous felines (Hardcover) 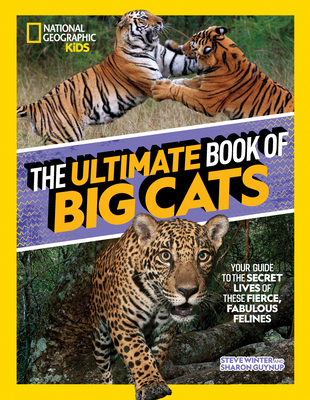 The Ultimate Book of Big Cats: Your guide to the secret lives of these fierce, fabulous felines (Hardcover)

Get ready to sink your teeth into the hidden worlds of the seven spectacular big cats—and meet some of their smaller cousins—with National Geographic Explorers Steve Winter and Sharon Guynup as your guides.

From rarely seen snow leopards high up in the Himalaya to tigers silently stalking prey through thick jungle to lions going in for the kill, you’ll get the inside scoop on the fascinating worlds of wild felines and what it’s like to live alongside them.

Find out how these powerful predators live, hunt, raise their cubs, and how they have adapted to their unique environments. Which cat has the strongest bite? What’s the difference between a cougar and a mountain lion? Why does a tiger have stripes? How do big cats’ hunting skills stack up against other top predators? The answers to all these questions and more await in this complete compendium. With exclusive National Geographic photographs and hair-raising behind-the-lens stories from Winter, this book takes you up close and personal with the coolest cats around.

Complete your collection with TheUltimate Book of Sharks and The Ultimate Book of African Animals!
SHARON GUYNUP is an award-winning investigative journalist, author, and National Geographic Explorer whose ground-breaking work on big cat conservation and uncovering illegal wildlife trafficking has been featured in National Geographic magazine, the New York Times, Smithsonian, and on NPR. Her work has earned her a 2017 award from the American Society of Journalists and Authors, recognition from the Society of Professional Journalists’ New York and D.C. chapters, and the Humane Society Genesis Award. Today, she consults on wildlife and ecosystems as a global fellow with Wilson Center.


STEVE WINTER is a wildlife photojournalist who has photographed and produced stories for National Geographic since 1991. He specializes in wildlife and particularly big cats, and some of his big cat photographs are counted among National Geographic’s most iconic. He’s been named BBC Wildlife Photographer of the Year and BBC Wildlife Photojournalist of the Year; was a two-time winner of Picture of the Year International’s Global Vision Award; won first prize in the nature story category from World Press Photo in 2008 and 2014; and won second prize in World Press Photo in 2020 in the contemporary issues category for a story on captive tigers. He has appeared on 60 Minutes, CNN, NPR, BBC, and been interviewed by media outlets worldwide to discuss his work. He lectures on big cats as part of the National Geographic LIVE series and speaks globally on photography and conservation issues.