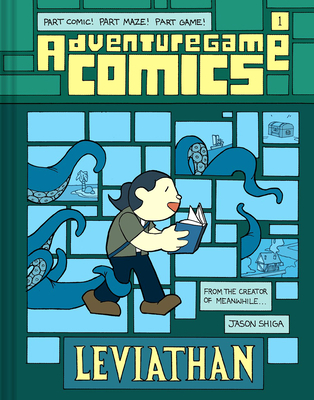 
On Our Shelves Now
Make choices to defeat a mysterious sea monster in the first of a new series of innovative, interactive graphic novels from the award-winning creator of Meanwhile

Adventuregame Comics is a new series of interactive graphic novels in the vein of Jason Shiga's hit graphic novel Meanwhile. Readers follow the story from panel to panel using tubes that connect them, and sometimes the path will split, giving readers the chance to choose how the story unfolds.

Leviathan is set in a medieval coastal village, where residents live in fear of a giant sea creature. Your goal as a reader is simple: defeat the Leviathan! As you wander through the open world, the town's backstory is revealed. You can attempt to visit the library to try and learn why the Leviathan destroyed it years ago. You can stop by the castle to discover the town was once riddled with crime and theft—and how that’s stopped as the Leviathan will wreak havoc on the town for the smallest misdeeds. If you’re lucky, you may find your way to the old wizard who may possess the one thing that could keep the Leviathan at bay. But not everything is as it appears in this village. Can you discover the secrets and stop the Leviathan before it’s too late?

Jason Shiga is a cartoonist from Oakland, California. His comics have a geeky side, and often feature exciting uses of math, mazes, puzzles, and unconventional narrative techniques. In his 25 year career, Shiga has created 8 graphic novels, 20 comic books, over a dozen magazine and newspaper strips, and the world's second-largest interactive comic. He has won 2 Eisner awards, 2 Ignatz awards, and his work has been featured as an official selection for the Comics Festival in Angouleme.
**STARRED REVIEW**
"Shiga captures that thrill of limitless possibility in this choose-your-own-path style maze of a comic book wonder... The tantalizing glimpses of un-had adventures as you flip through pages on your current quest; and the labyrinth-winding, squat-figured, goggle-eyed fun of Shiga’s art all invite many return reads."—Booklist

"The reveals and lore in this analog video game of a book are most rewarding when explored one panel at a time. The puzzles are designed to challenge and delight; let them."