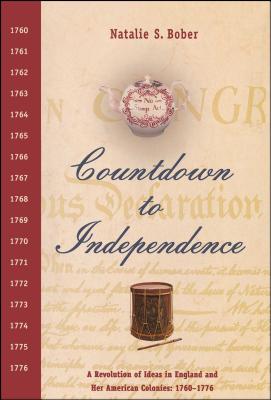 
Usually Ships in 1-5 Days
For fifteen years between 1760 and 1775, before a drop of blood was shed at Lexington and Concord, ideas were the weapons with which Americans and Englishmen waged a revolution. Words of protest did not become deeds of resistance until both sides came to realize that only force would decide the issues that divided the empire.

How did the social, political, and intellectual developments of the colonial period precipitate a shocking revolution by the American colonists against Great Britain? What was the British view of the situation in America? Who were the people involved (both Whigs and Tories) in the American colonies and in England? What were the issues that were brewing below the surface that made it possible for a ragged band of patriots to defeat the strongest army in the world? Was the ultimate separation of the American colonies from England inevitable, or could it have been avoided?

Focusing on the period from the ascendance of George III to the throne of Great Britain until the approval in the Continental Congress of the Declaration of Independence, acclaimed biographer Natalie S. Bober attempts to answer these, and other questions, as she presents a bi-focal view of the events leading to the Revolutionary War -- telling the story through the eyes of the heroes and rebels involved on both sides of the Atlantic Ocean. Recognizing that biography is the human heart of history, she has used engaging mini-biographies of the cast of British and American characters. By taking her readers into the actual scenes, both in America and England and revealing the human stories behind the historic events, and by using original sources such as letters, diaries, and speeches, she allows the characters who played a role in the unfolding drama to step off the pages of the book and become living people.

As she captures the drama, the wit, the politics, and the manners of the generation that governed and lost the first British Empire, all the while doing full justice to the cause of the colonial patriots, she takes her readers on a provocative and stimulating countdown to independence.
Natalie S. Bober is an award-winning biographer and a historian with a long-standing interest in the eighteenth century. She lectures extensively, has taught and served as a consultant on the secondary and college levels, and was part of the Ken Burns film documentary on Thomas Jefferson. Her most recent books include A Restless Spirit: The Story of Robert Frost; Thomas Jefferson: Man on a Mountain; and Abigail Adams: Witness to a Revolution, winner of the Boston Globe-Horn Book Award for Nonfiction and the Golden Kite Award of the SCBWI. She resides with her husband in Westchester County, New York, and derives great pleasure from her grandchildren, who happily serve as readers and critics of her books.