Soul Surfer: A True Story of Faith, Family, and Fighting to Get Back on the Board (Paperback) 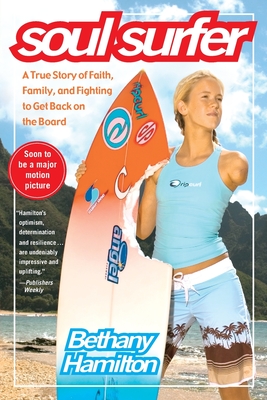 Soul Surfer: A True Story of Faith, Family, and Fighting to Get Back on the Board (Paperback)


Usually Ships in 1-5 Days
In this moving personal account of faith and fortitude, internationally ranked surfer Bethany Hamilton tells how she survived a shark attack that cost her arm--but not her spirit.

They say Bethany Hamilton has saltwater in her veins. How else could one explain the passion that drives her to surf? How else could one explain that nothing—not even the loss of her arm—could come between her and the waves? That Halloween morning in Kauai, Hawaii, Bethany responded to the shark’s stealth attack with the calm of a girl with God on her side. Pushing pain and panic aside, she began to paddle with one arm, focusing on a single thought: “Get to the beach....” And when the first thing Bethany wanted to know after surgery was “When can I surf again?” it became clear that her spirit and determination were part of a greater story—a tale of courage and faith that this soft-spoken girl would come to share with the world.

Soul Surfer is a moving account of Bethany’s life as a young surfer, her recovery after the attack, the adjustments she’s made to her unique surfing style, her unprecedented bid for a top showing in the World Surfing Championships, and, most fundamentally, her belief in God. It is a story of girl power and spiritual grit that shows the body is no more essential to surfing—perhaps even less so—than the soul.
Bethany Hamilton, who YM magazine called the "Bravest Girl in America," has been surfing since she was seven years old. Since her shark attack last year Bethany has participated in numerous competitions and has received the 2004 Teen Choice award for Most Courageous Teen and the 2004 ESPY Award for Best Comeback Athlete.

Sheryl Berk most recently collaborated with Sopranos star Jamie-Lynn DiScala on her memoir, Wise Girl, and with Britney Spears on her autobiography, Stages. She lives in Manhattan with her husband, Peter, and their own little miracle, daughter Carrie.

Rick Bundschuh is a surfer, writer, and cartoonist, and serves as one of the pastors at Kauai Christian Fellowship. He makes his home in Kalaheo, Hawaii, along with his wife, Lauren, their four kids, a weenie dog, and a quiver of surfboards.