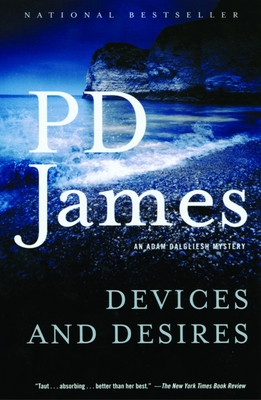 Featuring the famous Commander Adam Dalgliesh, Devices and Desires is a thrilling and insightfully crafted novel of fallible people caught in a net of secrets, ambitions, and schemes on a lonely stretch of Norfolk coastline.

Commander Dalgliesh of Scotland Yard has just published a new book of poems and has taken a brief respite from publicity on the remote Larksoken headland on the Norfolk coast in a converted windmill left to him by his aunt. But he cannot so easily escape murder. A psychotic strangler of young women is at large in Norfolk, and getting nearer to Larksoken with every killing. And when Dalgliesh discovers the murdered body of the Acting Administrative Officer on the beach, he finds himself caught up in the passions and dangerous secrets of the headland community and in one of the most baffling murder cases of his career.

P. D. James is the author of twenty books, many of which feature her detective hero Adam Dalgliesh and have been televised or filmed. She was the recipient of many honors, including the Mystery Writers of America Grand Master Award and the National Arts Club Medal of Honor for Literature, and in 1991 was created Baroness James of Holland Park. She died in 2014.

“I have often thought of mysteries as the sorbets of literature, something light and tangy to clear the palate between more serious courses. The books of P.D. James, however are more substantial fare, fulfilling as well as delicious, and Devices and Desires is no exception.” —The Washington Post Book World

“A masterful writer.... Devices and Desires seems to be that highly prized work–a terrific tale suspense and detection that also delivers the satisfaction of a mainstream novel.” —The Wall Street Journal

“Her stories are so engrossing that it is difficult to read slowly enough to pay attention to the remarkable writing. But in Devices and Desires, she is so at the top of her form that to rush though would itself be a crime.” —The Kansas City Star

“A cleverly crafted book that readers may very well stay up all night to finish.... She exposes the murderously repressed rage beneath the clam surface of typical middle-class Britishers.” —Boston Herald

“The greatest living mystery writer ... weaves a dazzling array of psychological profiles into a gently ironic examination of human life and the ‘relative value’ we ascribe to it.” —People

“James at her best ... a superb tale of murder.” —Booklist

“Devices and Desires may be her best yet.... The plot is superb, with the larger moral issues of a nearby nuclear power station and the thickly interwoven lives of characters lending measured gravity to the sensational murder story. And the prose style is a dream.” —The Seattle Times

“James is one of Britain’s best writers in the genre.... Devices and Desires brings the classic whodunit as far as it can go.” —The Detroit News

“The best book she’s written. It has literary merit that detective works seldom attempt ... everything fits beautifully.” —The Sacramento Bee

“No other mystery writer–and few writers period–offers such a rich bounty.... Devices and Desires is superb. It is what good writing–and reading–is all about. James has used all her powers to produce her best work yet. Her fans–old and new–will be overjoyed.” —Fort Worth Star-Telegram

“James once again gives us a convincing portrait of contemporary society, while at the same time she scrupulously observes–and smartly updates and complicates–all the mystery genre conventions.” —San Diego Magazine

“Demonstrates just how well James commands the English language.... The complex plot unfolds into the usual Jamesian tangle of human relationships and subplots. The story takes shape as James unwraps each nuance of personality, each intricate piece of the puzzle.” —Library Journal