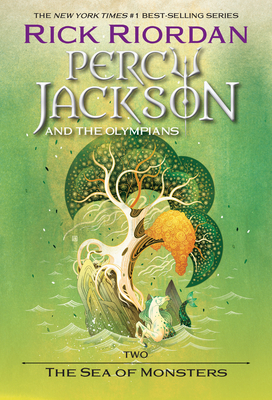 
Usually Ships in 1-5 Days
Don't get left behind! Read the Percy Jackson series before the Disney+ series comes out. You'll be proud to be seen with this stunning paperback edition.

*“In a feat worthy of his heroic subjects, Riordan crafts a sequel stronger than his compelling debut.”--Publishers Weekly (starred review)

After a summer spent trying to prevent a catastrophic war among the Greek gods, Percy Jackson finds his seventh-grade school year unnervingly quiet. His biggest problem is dealing with his new friend, Tyson—a six-foot-three, mentally challenged homeless kid who follows Percy everywhere, making it hard for Percy to have any “normal” friends.

But things don’t stay quiet for long. Percy soon discovers there is trouble at Camp Half-Blood: the magical borders which protect Half-Blood Hill have been poisoned by a mysterious enemy, and the only safe haven for demigods is on the verge of being overrun by mythological monsters. To save the camp, Percy needs the help of his best friend, Grover, who has been taken prisoner by the Cyclops Polyphemus on an island somewhere in the Sea of Monsters, the dangerous waters Greek heroes have sailed for millennia—only today, the Sea of Monsters goes by a new name…the Bermuda Triangle.

Now Percy and his friends—Grover, Annabeth, and Tyson—must retrieve the Golden Fleece from the Island of the Cyclopes by the end of the summer or Camp Half-Blood will be destroyed. But first, Percy will learn a stunning new secret about his family—one that makes him question whether being claimed as Poseidon’s son is an honor or simply a cruel joke.

Whether you are new to Percy or a longtime fan, this gorgeous paperback edition is a must-have for your library.

Complete your collection with:
Rick Riordan, dubbed “storyteller of the gods” byPublishers Weekly, is the author of five #1 New York Times best-selling middle grade series with millions of copies sold throughout the world: Percy Jackson and the Olympians, The Heroes of Olympus, and the Trials of Apollo, based on Greek and Roman mythology; the Kane Chronicles, based on Ancient Egyptian mythology; and Magnus Chase and the Gods of Asgard, based on Norse mythology. Rick collaborated with illustrator John Rocco on two #1 New York Times best-selling collections of Greek myths for the whole family: Percy Jackson’s Greek Gods and Percy Jackson’s Greek Heroes. His most recent book is Daughter of the Deep, a modern take on Jules Verne's 20,000 Leagues Under the Sea. Rick is also the publisher of an imprint at Disney-Hyperion, Rick Riordan Presents, dedicated to finding other authors of highly entertaining fiction based on world cultures and mythologies. He lives in Boston, Massachusetts with his wife and two sons. Follow him on Twitter at @RickRiordan.

Victo Ngai is a Forbes 30 Under 30 honoree, Society of Illustrator New York Gold Medalist, and Hugo and World Fantasy Award finalist. Originally from Hong Kong, she graduated from the Rhode Island School of Design and is now based in Los Angeles. She illustrates for newspapers and magazines, creates storyboards and art for animation, provides book cover art, and works on packaging and advertisement campaigns. Victo has also taught at the School of Visual Art in New York and frequently gives guest lectures at universities and workshops at conferences. Follow her on Twitter and Instagram @victongai.
*"A fast and funny tale, full of action, wisecracks, and superhuman powers."—KLIATT (starred review)

*"In a feat worthy of his heroic subjects, Riordan crafts a sequel stronger than his compelling debut."—Publishers Weekly (starred review)