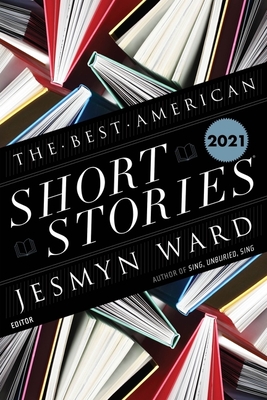 In her introduction to The Best American Short Stories 2021, guest editor JesmynWard says that the best fiction offers the reader a “sense of repair.”The stories in this year’s collection accomplish just that, immersing the reader in powerfully imagined worlds and allowing them to bring some of that power into their own lives. From a stirring portrait of Rodney King’s final days to a surreal video game set in the Middle East,with real consequences, to an indigenous boy’s gripping escape from his captors, this collection renders profoundly empathetic depictions of the variety of human experience. These stories are poignant reminders of the possibilities of fiction: as you sink into world after world, become character after character, as Ward writes,you“forget yourself, and then, upon surfacing, know yourself and others anew.

JESMYN WARD received her MFA from the University of Michigan and is currently a professor of creative writing at Tulane University. She is the author of the novels Where the Line Bleeds and Salvage the Bones, which won the 2011 National Book Award, and Sing, Unburied, Sing, which won the 2017 National Book Award. She is also the editor of the anthology The Fire This Time and the author of the memoir Men We Reaped, which was a finalist for the National Book Critics Circle Award. From 2008 to 2010, Ward had a Stegner Fellowship at Stanford University. She was the John and Renée Grisham Writer in Residence at the University of Mississippi for the 2010–2011 academic year. In 2016, the American Academy of Arts and Letters selected Ward for the Strauss Living Award. She lives in Mississippi.

HEIDI PITLOR is a former senior editor at Houghton Mifflin Harcourt and has been the series editor for The Best American Short Stories since 2007. She is the author of the novels The Birthdays and The Daylight Marriage.

"As guest editor of this year’s entry in the Best American Short Stories series, Ward has assembled a brilliant and moving collection...These 20 stories capture beautiful and devastating human experiences and the tales we tell to persevere. Contributors' captivating prose and incredible storytelling will plunge readers into fascinating worlds and challenge them to take on new perspectives."--Booklist, STARRED review    —