It's My Whole Life: Charlotte Salomon: An Artist in Hiding During World War II (Hardcover) 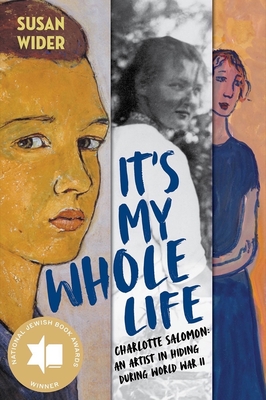 It's My Whole Life: Charlotte Salomon: An Artist in Hiding During World War II (Hardcover)

A gripping middle grade biography of Charlotte Salomon, and an ode to how art can capture both life’s everyday beauty and its monumental horrors.

Charlotte Salomon was a German-Jewish artist born in Berlin. She is remembered for her autobiographical series of paintings, Life? or Theater?, which consists of 769 individual works painted between 1940 and 1942 while she was in hiding from the Nazis in the south of France, and which has been called a painted parallel to Anne Frank’s The Diary of a Young Girl and an early graphic novel. In 1943, she entrusted her collection of paintings to a friend. In October of that year, she was captured and deported to Auschwitz, where she and her unborn child were gassed to death upon arrival.

It’s My Whole Life covers Charlotte’s remarkable life from her childhood and art school days to her time as a refugee in Nazi-occupied France, where she created the largest single work of art created by a Jew during the Holocaust. Compellingly written and accompanied by vivid color photographs of Salomon’s artwork, Susan Wider has crafted an illuminating portrait of an enigmatic and evanescent young artist.

A graduate of The Middlebury Institute of International Studies at Monterey and of the University of New Mexico, Susan Wider has written for Orion, THE Magazine, The Fourth River, and Wild Hope magazine, among others. Before becoming a full-time writer, she held senior management positions at the Georgia O’Keeffe Museum, The Santa Fe Institute, and the Lovelace Respiratory Research Institute. Earlier in her career she taught American English for the French Chamber of Commerce in Normandy, France and worked as a violinist in several professional chamber and symphony orchestras. It's My Whole Life is her first book. She lives outside Santa Fe, New Mexico.
[A] well-researched biography of German Jewish artist Charlotte Salomon… allowing not only for analysis of her art but also for an intimate focus on particular moments in her life.
— Horn Book Magazine