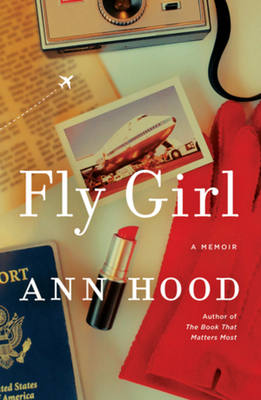 In 1978, in the tailwind of the golden age of air travel, flight attendants were the epitome of glamor and sophistication. Fresh out of college and hungry to experience the world—and maybe, one day, write about it—Ann Hood joined their ranks. After a grueling job search, Hood survived TWA’s rigorous Breech Training Academy and learned to evacuate seven kinds of aircraft, deliver a baby, mix proper cocktails, administer oxygen, and stay calm no matter what the situation.

In the air, Hood found both the adventure she’d dreamt of and the unexpected realities of life on the job. She carved chateaubriand in the first-class cabin and dined in front of the pyramids in Cairo, fended off passengers’ advances and found romance on layovers in London and Lisbon, and walked more than a million miles in high heels. She flew through the start of deregulation, an oil crisis, massive furloughs, and a labor strike.

As the airline industry changed around her, Hood began to write—even drafting snatches of her first novel from the jump-seat. She reveals how the job empowered her, despite its roots in sexist standards. Packed with funny, moving, and shocking stories of life as a flight attendant, Fly Girl captures the nostalgia and magic of air travel at its height, and the thrill that remains with every takeoff.

Ann Hood is the author of the best-selling novels The Book That Matters Most, The Obituary Writer, and The Knitting Circle, and the memoir Comfort: A Journey Through Grief. Her most recent books are the memoirs Fly Girl A Memoir and Kitchen Yarns: Notes on Life, Love, and Food. She lives in Providence, Rhode Island, and New York City.
Hood is a generous, practiced storyteller, and she enlivens her reminiscences with entertaining stories about grumpy passengers and her own gaffes... A trip worth taking.
— Heller McAlpin - NPR

Fly Girl soars: Ann Hood’s memoir of her experiences as a flight attendant is a love letter to the years when flying was a dream—and the 747s ruled the skies. I was catapulted back in time and savored every second and every story from 35,000 feet in the air.

Winning and compulsively readable, Fly Girl is like a first-class ticket to the sadly-bygone days when air travel was stylish, sexy and deliciously rarified. What a pleasure to see another side of this best-selling author—the small-town girl with a passion for adventure who earns her flight-attendant’s wings while decidedly discovering her own.

Sparkling... Hood's companionable storytelling paired with her bold skewering of an oft-glamorized world...make for an enthralling account... From takeoff to landing, this entertains and inspires.
— Publishers Weekly

Hood’s delightful memoir of her stint as a TWA flight attendant in the late 1970s is full of amusing trivia, hilarious stories, and all the warmth of her novels… An engaging memoir perfect for fans of Hood’s and readers interested in aviation history or who love a good coming-of-age memoir.
— Library Journal

In this warm and engaging memoir, Ann Hood captures the heady thrills as well as the grueling realities of life as a flight attendant during the Golden Age of air travel. Over eight years, Hood walked a million miles, explored far-flung cities, and learned invaluable lessons that shaped her as a writer and a person. A brisk history lesson, an affectionate homage, and a thoughtful critique of the airline industry, Fly Girl soars.

Fly Girl is a sheer pleasure. A hilarious and often moving look back at a bygone era and a young woman’s coming of age.

At first blush, Fly Girl is a charming, layered memoir about Ann Hood’s life as a flight attendant who knew the industry in its glory days—and its-not-so-glorious days post-deregulation. But it’s also something much more, nothing less than a manifesto calling us to embrace joy and adventure, however we define them. I have always loved Ann’s stories and now I know why she has so many: She has lived, in the best, fullest sense of that word. She can't make the sun stand still, but, boy does she make it run.

As a young woman in the late 1970s, Ann Hood’s determination to seek an adventurous life propelled her into this contradictory profession. Now she flies readers through that era—of flight, American history, and her own life—and into the present with warmth, humor, and insight in a memoir that sparkles.
— Julia Cooke, author of Come Fly the World: The Jet Age Story of the Women of Pan Am