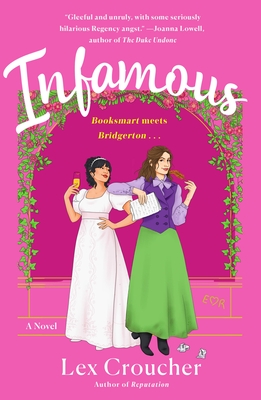 Dickinson meets Booksmart with a dash of Little Women in Infamous, a Regency-era queer romantic comedy with a deliciously feminist twist, from Lex Croucher, the author of Reputation.

Twenty-two-year-old aspiring writer Edith (“Eddie”) Miller and her best friend Rose have always done everything together—from climbing trees and sneaking bottles of wine, to extensive kissing practice. But Rose has started talking about marriage, and Eddie is horrified. Why can’t they continue as they always have?

Then Eddie meets charming, renowned poet Nash Nicholson––a rival of Lord Byron, if he does say so himself––and he welcomes her into his world of eccentric artists and boundary-breaking visionaries. When Eddie receives an invitation to Nash's crumbling Gothic estate in the countryside, promising inspiration (and time to finish her novel, a long-held dream), she eagerly agrees. But the pure hedonism and debauchery that ensues isn’t exactly what she had in mind, and Eddie soon finds herself torn between her complicated feelings for Rose and her equally complicated dynamic with Nash, whose increasingly bad behavior doesn’t match up to her vision for her literary hero.

Will Eddie be forced to choose between her friendship with Rose and her literary dreams––or will she be able to write her own happily ever after?

Lex Croucher is the author of Reputation, Infamous, and the YA novel, Gwen & Art Are Not in Love. Lex grew up in Surrey reading a lot of books and making friends with strangers on the internet, and now lives in London.

"Gleeful and unruly, Infamous brings Gen Z zeitgeist to some seriously hilarious Regency angst. Croucher is a rare talent, with a genius for hijinks, hot messes, irrepressible characters, and turns of phrase that will stick in your mind until the end of time. Eddie's coming-of-age arc shines with insights into the wild, worthwhile work it takes to find yourself, and find love." ––Joanna Lowell, author of The Duke Undone

There’s nothing prim or proper about Croucher’s dazzling debut, which is so boldly, audaciously modern in its portrayal of 19th-century mean-girl culture that I kept waiting for someone to inform the heroine that on Wednesdays, they wear pink." ––BookPage, starred review

"Think of Bridgerton crossed with Sex Education and you have Reputation...reminding us that the process of coming of age really hasn’t changed for centuries." ––Good Housekeeping (UK)

"Reputation is the fresh, fiercely feminist, and utterly irreverent sendup of Jane Austen that I didn't know I needed." ––Martha Waters, author of To Have and to Hoax