Taylor Before and After (Paperback) 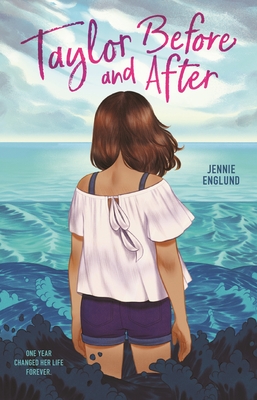 Taylor Before and After (Paperback)

In journal entries alternating between two timelines—before and after a tragic accident—Jennie Englund's heartfelt coming-of-age story, Taylor Before and After follows the year that changes one girl’s life forever.

Before, Taylor Harper is finally popular, sitting with the cool kids at lunch, and maybe, just maybe, getting invited to the biggest, most exclusive party of the year.

After, no one talks to her.

Before, she’s friends with Brielle Branson, the coolest girl in school.

After, Brielle has become a bully, and Taylor’s her favorite target.

Before, home isn’t perfect, but at least her family is together.

After, Mom won’t get out of bed, Dad won’t stop yelling, and Eli...

Through everything, Taylor has her notebook, a diary of the year that one fatal accident tears her life apart. In entries alternating between the first and second semester of her eighth-grade year, she navigates joy and grief, gain and loss, hope and depression.

How can Taylor pick up the pieces of what used to be her social life? How can her house ever feel like home again after everything that’s happened? And how can she move forward if she can’t stop looking back?

Jennie Englund began Taylor Before and After, her first book, during her time as a National Endowment for the Humanities fellow in Hawaii. She lives in Oregon, where she works as a teacher.

"Taylor Before and After moves like a wave from tragedy to hope, from despair to resilience. Readers will find inspiration in this love letter to the healing power of the written word."
—Adrienne Kisner, author of Dear Rachel Maddow

"Pays off in a powerful story charting the evolution of a life-shattering night and its aftermath... A resonant look at coming-of-age in a socially networked world." —Kirkus Reviews