The Librarian of Auschwitz (Paperback) 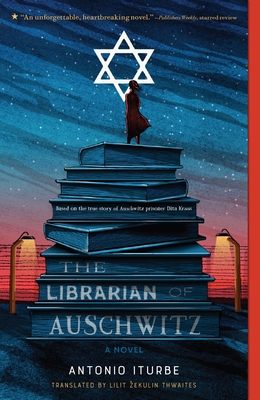 The Librarian of Auschwitz (Paperback)

Based on the experience of real-life Auschwitz prisoner Dita Kraus, journalist Antonio Iturbe tells the incredible story of a girl who risked her life to keep the magic of books alive during the Holocaust.

Fourteen-year-old Dita is one of the many imprisoned by the Nazis at Auschwitz. Taken, along with her mother and father, from the Terezín ghetto in Prague, Dita is adjusting to the constant terror that is life in the camp. When Jewish leader Freddy Hirsch asks Dita to take charge of the eight precious volumes the prisoners have managed to sneak past the guards, she agrees. And so Dita becomes the librarian of Auschwitz.

Out of one of the darkest chapters of human history comes this extraordinary story of courage and hope.

This title has Common Core connections.

Lilit Žekulin Thwaites is an award-winning Melbourne-based literary translator (Spanish>English), and an honorary research fellow in contemporary Spanish literature at La Trobe University. Her book-length translations include the bestselling The Librarian of Auschwitz (Antonio Iturbe, 2017), Australian Connection (multiple authors, 2019), and two futuristic novels by Rosa Montero, Tears in Rain (2012), and Weight of the Heart. (2016). Her translations of short stories, essays and the occasional poem have been published in journals and anthologies. She presents sessions at writers’ festivals, gives talks on Spain-related and translation topics, and organises visits to Australia by Spanish-speaking writers. In 2016, she was awarded Spain’s Order of Civil Merit for her promotion of Spanish culture in Australia.

"An unforgettable, heartbreaking novel." —Publishers Weekly, starred review, on The Librarian of Auschwitz

"Like Markus Zusak’s The Book Thief, it’s a sophisticated novel with mature themes, delivering an emotionally searing reading experience. An important novel that will stand with other powerful testaments from the Holocaust era." —Booklist, starred review, on The Librarian of Auschwitz

"This novel is one that could easily be recommended or taught alongside Elie Wiesel’s Night and The Diary of Anne Frank and a text that, once read, will never be forgotten. VERDICT A hauntingly authentic Holocaust retelling; a must for YA collections." —School Library Journal, starred review, on The Librarian of Auschwitz

"Though no punches are pulled about the unimaginable atrocity of the death camps, a life-affirming history." —Kirkus Reviews, starred review, on The Librarian of Auschwitz

"Iturbe’s remarkable account uses an immediate present tense to immerse readers in Dita’s story as she goes about what constitutes daily life in Auschwitz, all the while risking everything to distribute and hide the library’s books." —The Horn Book, starred review, on The Librarian of Auschwitz