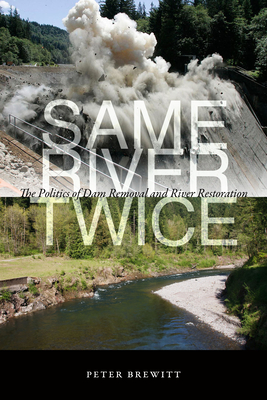 
Email or call for price
Dam removal was not a realistic option in the twentieth century, and people who suggested it were dismissed as radical dreamers. Over the past twenty years, dam removal has become increasingly common, with dozens of removals now taking place each year nationwide.

How did this happen? Same River Twice answers this question by telling the stories of three major Northwestern dam removals—the politics, people, hopes, and fears that shaped three rivers and their communities. Author Peter Brewitt begins each story with the dam’s construction, shows how its critics gained power, details the conflicts and controversies of removal, and explores the aftermath as the river re-established itself.

Each dam removal offers a unique case study. On the Elwha and Rogue Rivers, dam removal was a multi-decade political brawl; on the Sandy River it was swift and amicable. A key controversy in every case was the loss of the recreational lake created by the dam. Local communities loved their lakes and felt that they were natural, public spaces rather than industrial creations. They fought dam removal with passion and ingenuity. To be successful, dam removal advocates had to learn to weld together mega-coalitions that embraced most interest groups and moved forward together.

While the dams profiled here are all in the Pacific Northwest, dam removal is a national and international phenomenon, and Brewitt’s findings apply everywhere. Written for both a scholarly and a general audience, Same River Twice presents invaluable case studies for scholars of environmental politics, wildlife and public land professionals, environmental activists, and anyone interested in the intersection of politics, public policy, and dam removal.
PETER BREWITT grew up in Bangkok, Thailand, and East Alton, New Hampshire. After majoring in history at Dartmouth College, he spent five years as a naturalist, primarily in Yosemite National Park. He received his PhD in Environmental Studies from the University of California, Santa Cruz, where he focused on environmental policy. He is now a professor at Wofford College, where he teaches and conducts research about the politics of ecological restoration. Same River Twice is his first book.