The Universe in You: A Microscopic Journey (Hardcover) 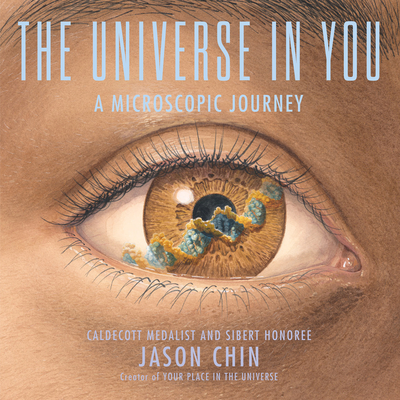 The Universe in You: A Microscopic Journey (Hardcover)


On Our Shelves Now
Jason Chin, winner of the Caldecott Medal for Watercress, dives into the microscopic building blocks of life in this companion to the award-winning Your Place in the Universe.

In Your Place in the Universe, Jason Chin zoomed outward, from our planet, solar system, and galaxy to the outer reaches  of the observable universe. Now, Chin reverses course, zooming in past our skin to our cells, molecules, and atoms, all the way down to particles so small we can’t yet even measure them.

Like its companion, The Universe in You is a mind-boggling adventure that makes complex science accessible and enjoyable to readers of any age.

Impeccably researched, wholly engrossing, and with extensive backmatter for additional learning, The Universe in You is another knockout from the award-winning creator of Redwoods, Grand Canyon, and other distinguished works of nonfiction for young readers.

Jason Chin is a celebrated author and illustrator of children’s books. He received the Caldecott Medal for his illustrations in Andrea Wang's Watercress, a Newbery Honor book and APALA award winner. His book Grand Canyon was awarded a Caldecott Honor, a Sibert Honor, and the NCTE Orbis Pictus Award. His other acclaimed nonfiction titles—Coral Reefs, Redwoods, Gravity, and Island: A Story of the Galapagos—have received numerous starred reviews and other accolades. He is also the illustrator of Stephanie Parsley Ledyard’s debut title Pie Is for Sharing and Miranda Paul’s Water is Water and Nine Months: Before a Baby is Born, the latter a Boston Horn Globe Honor Book. He lives in Vermont with his wife and children.

★ "Giving the biggest impact to these tiniest bits are full-page watercolor-and-gouache illustrations in fine detail, with an illustrator’s note explaining methods for depicting and coloring particles too miniscule for humans to visualize. . . .  stunning visuals. . . ."—Booklist, Starred Review

★ "Whether in the writing or page after page of cascading spreads drawing the eye in, science and poetry create a flawless blend of information, delivered with grace and confidence. . . . This book is a proper revelation, putting the ‘you’ in universe and giving children a way to grasp the infinity of the world and every particle of the planet. Exquisite."—School Library Journal, Starred Review

★ "The art's evocative detailing and dynamic compositions create vivid impressions of realism and movement that will carry viewers down to the point where size and location lose their meanings and then back around to the wide-eyed young observer. Another fantastic voyage from an accomplished author/illustrator, creatively presented."—Kirkus Reviews, Starred Review

"[A] gorgeously rendered nonfiction picture book with a poetic heart. . . . Chin's superb and richly detailed illustrations keep this title elevated. . . . Put this book in the hands of teachers seeking a framework for their biology units."—School Library Connection

"Youngsters will appreciate the speed at which Chin moves through the universe, changing the scale with each page flip, while insets of further facts and details will intrigue aspiring scientists who want to sit with the matter (pun fully intended). Chin’s characteristically detailed art is ideal to capture and delineate the tiny and unseeable. . . . a valuable addition to multiple science units."—The Bulletin of the Center for Children's Books