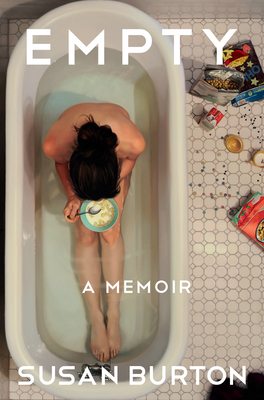 Eating disorders are very prevalent in our soicety, but they're a topic that is often only discussed in health classes and within the medical field.  Reading "Empty" helped me to fill in the gaps in what I knew about them.  "Food Troubles", as Burton puts it, influence every piece of a person's life.  Reading her firsthand account of struggles with anorexia and bing-eating disorder, I was moved by the lenghts Burton would go to hide her disordered behaviours from those closest to her, how her relationship with food directly impacted her college experience, and how her desire to feel "empty" impacted her mental health.  Burton's writing is real, raw, witty, and at times, heartbreaking.  I would highly recommend to anyone who wants to learn more.

— Abby
An editor at This American Life reveals the searing story of the secret binge-eating that dominated her adolescence and shapes her still.

“Her tale of compulsion and healing is candid and powerful.”—People

For almost thirty years, Susan Burton hid her obsession with food and the secret life of compulsive eating and starving that dominated her adolescence. This is the relentlessly honest, fiercely intelligent story of living with both anorexia and binge-eating disorder, moving past her shame, and learning to tell her secret.

When Burton was thirteen, her stable life in suburban Michigan was turned upside down by her parents’ abrupt divorce, and she moved to Colorado with her mother and sister. She seized on this move west as an adventure and an opportunity to reinvent herself from middle-school nerd to popular teenage girl. But in the fallout from her parents’ breakup, an inherited fixation on thinness went from “peculiarity to pathology.”

Susan entered into a painful cycle of anorexia and binge eating that formed a subterranean layer to her sunny life. She went from success to success—she went to Yale, scored a dream job at a magazine right out of college, and married her college boyfriend. But in college the compulsive eating got worse—she’d binge, swear it would be the last time, and then, hours later, do it again—and after she graduated she descended into anorexia, her attempt to “quit food.”

Binge eating is more prevalent than anorexia or bulimia, but there is less research and little storytelling to help us understand it. In tart, soulful prose Susan Burton strikes a blow for the importance of this kind of narrative and tells an exhilarating story of longing, compulsion and hard-earned self-revelation.
Susan Burton’s writing has appeared in Slate, Mother Jones, New York, The New Yorker, and The New York Times Magazine. She is a former editor of Harper’s and a producer of This American Life. Her radio documentaries have won numerous awards. The film Unaccompanied Minors is based on one of her radio essays. She lives in Brooklyn with her husband and their two sons.
“Her tale of compulsion and healing is candid and powerful.”—People

“Susan Burton’s Empty is a smart, brave gift to the world. She pulls back the curtain on an ailment all too many suffer with and often die from. Bravo!”—Mary Karr, author of The Art of Memoir and The Liars’ Club

“Burton’s memoir is valuable because she goes beyond simply confessing her shame; she rakes herself over the coals, and in doing so she models how anger can be used to clarify a story. Her anger gives the book its considerable power, its substantial grace and even, in the end, its meaning. Her fury is like a flashing light in a cave, or a portal. The force of it makes us not just appreciate but actually feel the force that drove her to commit her actions in the first place. The result is a book that wields a fearsome intimacy.”—Claire Dederer, The New York Times

“Residing inside all of us is a secret so fraught that it becomes unspeakable, and for Susan Burton, that secret was food: How it controlled her and how she tried to control it. How it haunted and comforted, becoming at turns her fiercest adversary and comforting companion. Empty is a tour de force of both vulnerability and strength, a memoir so unflinching and brave that it forces us to peer into our own dark places with newfound honesty and compassion. By giving voice to her shame, Burton teaches herself—and the rest of us—how to find power and freedom in the telling.”—Lori Gottlieb, author of Maybe You Should Talk to Someone: A Therapist, Her Therapist, and Our Lives Revealed

“Susan Burton’s Empty is by turns touching, frightening, fiercely candid, and beautifully written.  In this story of a teenager’s furtive eating disorders, Burton has sidestepped the clichés, and captured the enigma of attempting to sate, by gluttony and starvation, our human vulnerabilities.”—Jill Ciment, author of The Body in Question

“Susan Burton’s brave and candid book reveals the inner landscape of an adolescent girl, and the way the mind can be hypnotized by the idea of the body. Beautifully written, touching and intimate, Empty speaks to a secret shared by many American women.”—Roxana Robinson, author of Dawson’s Fall