Eyes of the World: Robert Capa, Gerda Taro, and the Invention of Modern Photojournalism (Hardcover) 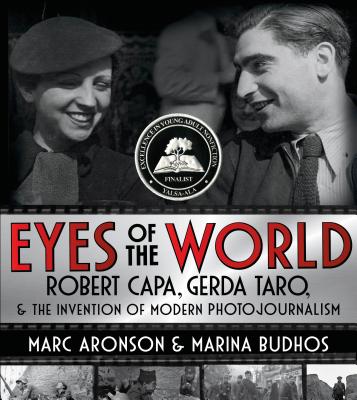 Eyes of the World: Robert Capa, Gerda Taro, and the Invention of Modern Photojournalism (Hardcover)

Robert Capa and Gerda Taro were young Jewish refugees, idealistic and in love. As photographers in the 1930s, they set off to capture their generation's most important struggle—the fight against fascism. Among the first to depict modern warfare, Capa, Taro, and their friend Chim took powerful photographs of the Spanish Civil War that went straight from the action to news magazines. They brought a human face to war with their iconic shots of a loving couple resting, a wary orphan, and, always, more and more refugees—people driven from their homes by bombs, guns, and planes.

Today, our screens are flooded with images from around the world. But Capa and Taro were pioneers, bringing home the crises and dramas of their time—and helping give birth to the idea of bearing witness through technology.

With a cast of characters ranging from Langston Hughes and George Orwell to Pablo Picasso and Ernest Hemingway, and packed with dramatic photos, posters, and cinematic magazine layouts, here is Capa and Taro’s riveting, tragic, and ultimately inspiring story.

This thoroughly-researched and documented book can be worked into multiple aspects of the common core curriculum.

Marc Aronson is an author, editor, publisher, speaker, historian, and book producer. Marc's mission is to inspire young people to ask questions, to look around, behind, and inside of the stories the world tells us. He writes a monthly column for School Library Journal on nonfiction for younger readers, and frequently speaks about boys and reading. Marc was awarded the Robert F. Sibert Award for the best in children's nonfiction for Sir Walter Ralegh and the Quest for El Dorado, and his books have been selected as a New York Times Notable Book and a School Library Journal best book. In 2006, he was given the ALAN Award by NCTE for service to teenagers, and was named the local spokesman for the History Channel's Save Our History program. He lives with his wife and two sons in Maplewood, New Jersey.

Marina Budhos writes fiction and nonfiction for adults and teenagers, including Watched, as well as Sugar Changed the World and Eyes of the World, co-written with her husband, Marc Aronson. She is a professor of English at William Paterson University and lives with her two sons in Maplewood, NJ.

“Eyes of the World captures an extraordinary—and tragic—moment in time. Robert Capa and Gerda Taro were young, idealistic, in love, and two of the best photographers who ever lived. This book does a great service for readers of all ages by evoking that moment telling the story of this couple so well.” —Adam Hochchild, author of Spain in Our Hearts: Americans in the Spanish Civil War 1936-1939

“A fascinating look at the evolution of photojournalism.... Readers not only get a strong sense of who these photographers were as people, they will understand what made their pictures so special. Thoroughly researched and cited, the text offers a unique perspective.” —Booklist, starred review

“Aronson and Budhos do a phenomenal job bringing the Spanish Civil War to life through the eyes of two young photojournalists.” —VOYA, starred review