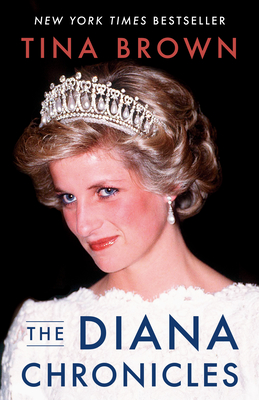 "The best book on Diana." —The New Yorker

Was she “the people’s princess,” who electrified the world with her beauty and humanitarian missions? Or was she manipulative and media-savvy and nearly brought down the monarchy?

Tina Brown, former Editor-in-Chief of Tatler, England’s glossiest gossip magazine; Vanity Fair; and The New Yorker gives us the answers. Tina knew Diana personally and has far-reaching insight into the royals and the Queen herself.

In The Diana Chronicles, you will meet a formidable female cast and understand as never before the society that shaped them: Diana's sexually charged mother, her scheming grandmother, the stepmother she hated but finally came to terms with, and bad-girl Fergie, her sister-in-law, who concealed wounds of her own.

Most formidable of them all was her mother-in-law, the Queen, whose admiration Diana sought till the day she died. Add Camilla Parker-Bowles, the ultimate "other woman" into this combustible mix, and it's no wonder that Diana broke out of her royal cage into celebrity culture, where she found her own power and used it to devastating effect.

Tina Brown is an award-winning writer, the former editor in chief of Tatler, Vanity Fair, and The New Yorker, and the founder of The Daily Beast and of the live event platform Women in the World. She is the author of the #1 New York Times bestseller The Diana Chronicles, and in 2017 she published The Vanity Fair Diaries, chosen as one of the best books of the year by Time, People, The Guardian, The Economist, Entertainment Weekly, and Vogue. In 2000 she was awarded the CBE (Commander of the British Empire) by Queen Elizabeth II for her services to journalism. She lives in New York City.

"The best book on Diana." —The New Yorker

"Tina Brown knows this world much better than many who inhabit it." —The New York Times

"The book's greatest attraction ... is its sheer wealth of detail, by turns salacious, vinegary, depressing, and hilarious...a psychodrama, a morality play, a pageant of recklessness and revenge, of passion and pity, of loneliness and looniness." —The Wall Street Journal

"Peels many layers of ... mystery away and even makes the old horror stories of [Diana's] life seem fresh ... Brown gives them new vigor, with insights based on her own exhaustive research and a wickedly canny, celebrity-trained eye for detail." —Boston Globe

"The Diana Chronicles ... has enough of Diana's hairpin personality turns, emotional drops, and gleeful summits to be a Disneyland thrill ride ... Brown reminds us of her instantly intimate, magical presence." —Los Angeles Times

"[Tina Brown] tells the story fluently, with engrossing detail on every page, and with the mastery of tone that made her Tatler famous for being popular with the people it was laughing at." —The New Yorker