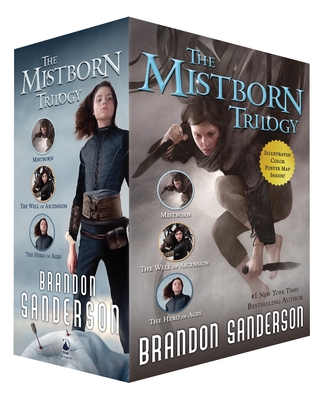 This wildly popular epic YA fantasy series is for ages 13 and up. Each boxed set includes a fold out poster map of Luthadel.

Once, a hero rose to save the world. He failed.

For a thousand years since, the world has been a wasteland of ash and mist ruled by the immortal emperor known as the Lord Ruler. Every revolt has failed miserably.

Yet somehow, hope survives and a new kind of uprising is being planned-one that depends on the cunning of a brilliant criminal mastermind and the determination of an unlikely heroine: a teenage street urchin named Vin.

Once, a hero rose to save the world and failed. This time, can a young heroine succeed?

"If you're a fan of fantasy and haven't read the Mistborn trilogy yet, you have no excuses. Go buy a copy." -Forbes on the Mistborn Trilogy

"Intrigue, politics, and conspiracies mesh complexly in a world Sanderson realizes in satisfying depth and peoples with impressive characters." -Booklist on Mistborn

Brandon Sanderson grew up in Lincoln, Nebraska. He lives in Utah with his wife and children and teaches creative writing at Brigham Young University. He is the author of such bestsellers as the Mistborn® trilogy and its sequels, The Alloy of Law, Shadows of Self, and The Bands of Mourning; the Stormlight Archive novels The Way of Kings and Words of Radiance; and other novels, including The Rithmatist, Steelheart, and Skyward. In 2013, he won a Hugo Award for Best Novella for The Emperor's Soul, set in the world of his acclaimed first novel, Elantris. Additionally, he was chosen to complete Robert Jordan's Wheel of Time® sequence.