The Radicalism of the American Revolution (Paperback) 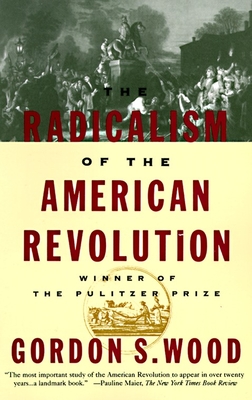 The Radicalism of the American Revolution (Paperback)


Usually Ships in 1-5 Days
In a grand and immemsely readable synthesis of historical, political, cultural, and economic analysis, a prize-winning historian describes the events that made the American Revolution. Gordon S. Wood depicts a revolution that was about much more than a break from England, rather it transformed an almost feudal society into a democratic one, whose emerging realities sometimes baffled and disappointed its founding fathers.
Gordon S. Wood is Alva O. Way Professor of History Emeritus at Brown University. His books include the Pulitzer Prize-winning The Radicalism of the American Revolution, the Bancroft Prize-winning The Creation of the American Republic, 1776-1787, The Americanization of Benjamin Franklin, and The Purpose of the Past: Reflections on the Uses of History. He writes frequently for The New York Review of Books and The New Republic.
"The most important study of the American Revolution to appear in over twenty years ... a landmark book." —The New York Times Book Review

"A breathtaking social, political, and ideological analysis. This book will set the agenda for discussion for some time to come." —Richard L. Bushman