Who Is Stacey Abrams? (Who HQ Now) (Paperback) 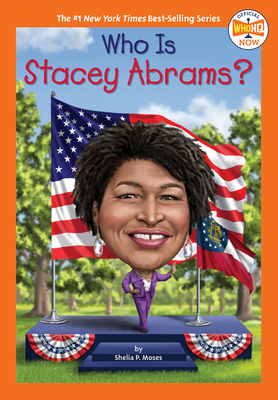 Who Is Stacey Abrams? (Who HQ Now) (Paperback)


On Our Shelves Now
Discover how a young girl who loved to read and write became a voting rights activist, a candidate for governor of Georgia, and an author.


Presenting Who HQ Now: an exciting addition to the #1 New York Times Best-Selling Who Was? series!

Stacey Abrams began her career in politics at the age of seventeen when she was hired as a typist for a congressional campaign. From there, she worked hard to get into Yale law school and, eventually, was elected into the House of Representatives. In 2018, she became the first Black woman in the United States to be a major party's nominee for governor when she was selected as the Democratic candidate. Although she didn't win that race, she decided to run again in 2022, proving that she never backs down from a challenge. Stacey made it her mission to help ensure that all people who are eligible have the right and ability to vote. Her Fair Fight Action organization helps prevent voter suppression across the country.

When she was growing up, Stacey was taught three important principles by her parents: go to school, go to church, and take care of each other. And these are the same beliefs she holds today.
Shelia P. Moses is a poet, award-winning author, playwright, and producer. She has written several books for young readers, including The Legend of Buddy Bush; I, Dred Scott: A Fictional Slave Narrative Based on the Life and Legal Precedent of Dred Scott; and The Baptism. She lives in Atlanta, Georgia.