All I Want for Christmas (Paperback) 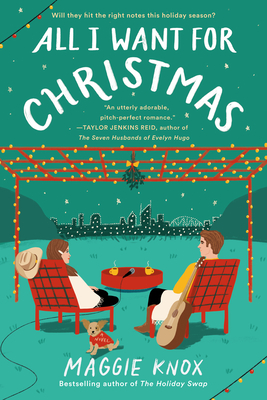 All I Want for Christmas (Paperback)


Usually Ships in 1-5 Days
A pitch-perfect holiday rom com about two oil-and-water reality-star country singers who must fake a relationship in order to win the opportunity of a lifetime, perfect for fans of Sally Thorne's The Hating Game and Christina Lauren's In a Holidaze.

Will they hit the right notes this holiday season?

When Sadie and Max are selected as contestants on the famed reality singing show Starmaker, each thinks they’ve finally gotten their big Nashville break. But then they’re paired up for duet week and stun the world with their romantic onstage chemistry. With fans going wild for #Saxie the network demands that they remain a duo on and offstage, or exit the competition. Faking a relationship until their final performance in the Starmaker holiday special shouldn't be too hard, except for one small problem—Sadie and Max can’t stand each other.

But with their dreams just within reach, they agree to the ruse. Will their fake relationship be exposed before they can win? Or might their phony connection turn real by the Christmas finale?
Maggie Knox is the pen name for bestselling Canadian writing duo Karma Brown and Marissa Stapley. Brown is an award-winning journalist and bestselling author of five novels, including the #1 national bestseller Recipe for a Perfect Wife, as well as the non-fiction bestseller The 4% Fix: How one hour can change your life. Her writing has appeared in publications such as Self, Redbook, Today’s Parent, and Chatelaine. She lives just outside Toronto with her family and a labradoodle named Fred. Stapley is a former magazine editor and New York Times bestselling author of Reese’s Book Club Pick Lucky, as well as international bestsellers Mating for Life, Things to Do When It’s Raining, and The Last Resort. Many of her novels have been optioned for television and her journalism has appeared in The Globe and Mail, Toronto Star, Elle, Today’s Parent, and Reader’s Digest. She lives in Toronto with her family and a pre­cocious black cat named Oscar. The Holiday Swap was their first novel writing together as Maggie Knox and is a Canadian bestseller.
"Unbelievably fun. All I Want for Christmas left me singing, and swooning, with holiday feels." –Jean Meltzer, author of The Matzah Ball